Fame descended on these newcomers in 2003. 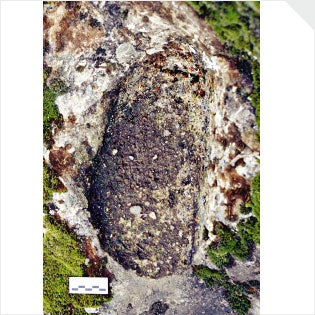 Footprint of the Year

Insanely Large Rodent of the Year

The discovery of a buffalo-size guinea pig fossil in Venezuela was announced in September — the first complete specimen ever found. Scientists suspect Phoberomys pattersoni’s size — 10 feet long, 4 feet tall — drove it to extinction eight million years ago: Burrowing to escape giant crocodiles was decidedly out of the question.

Most Convenient Genetically Modified Organism of the Year

By “knocking out” an enzyme that directs caffeine production, Japanese scientists have genetically engineered decaf coffee plants that will produce 70 percent less jitter than the natural variety.

Particle of the Year

The pentaquark, which scientists say they may have glimpsed, would be an unusual addition to the particle zoo: It’s composed of five quarks, not the typical two or three. Physicists hope the finding will shed light on the still-mysterious strong nuclear force, which holds the atom’s nucleus together.

Insect Athlete of the Year

Extremophile of the Year