Physicists are increasingly certain a mysterious force is driving the universe apart. If only they knew what it was. 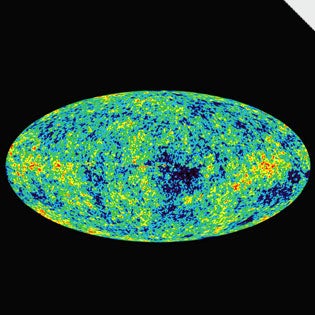 The infant universe in a WMAP snapshot. Red regions are warmer, blues colder; the variations give clues to how galaxies formed.

For astronomers, 2003 brought some answers, more questions and a deepening conviction: Something strange is happening to the universe. In February a satellite operating a million miles from Earth made a series of measurements that were as baffling as they were precise. A mysterious repulsive force called dark energy accounts for 73 percent of the entire mass-energy of the universe, the Wilkinson Microwave Anisotropy Probe (WMAP) found; 23 percent consists of invisible dark matter, and only 4 percent of the universe is ordinary matter and energy.

All of which confirms a puzzling new theory that has been emerging for the past few years — that dark energy is accelerating the expansion of the universe. In August, Dartmouth theoretical physicist Robert Caldwell and two Caltech colleagues pushed that notion to the limits, predicting that 20 billion years from now the universe and all it contains will be extinguished when dark energy rips apart stars, planets, even atoms. “It sure seems that what we have here is an indication of some kind of new physics,” says Saul Perlmutter, an astrophysicist at Lawrence Berkeley National Lab.

A new tool set to launch within the decade, the SuperNova Acceleration Probe, will make the most detailed study yet of the dark-energy-driven expansion, by examining light from exploding stars called supernovas. “We live in an amazingly lucky time,” says Perlmutter. “For the first time we not only have the conceptual tools to ask questions about the universe, we also have the technology to go out and make a measurement.”