Columbia disaster: When Columbia disintegrated, killing all seven astronauts, it was shades of Challenger. Will NASA be undone by its obsessive focus on the shuttle? 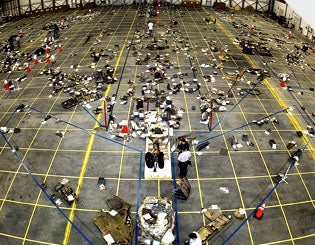 NASA recovered thousands of pieces of Columbia to investigate the tragedy.

Six months after the space shuttle Columbia broke apart over Texas, experts concluded that the immediate cause of the February 1 disaster was an errant piece of insulating foam — but that the fundamental fault lay with the space agency itself. “NASA’s organizational culture had as much to do with this accident as foam did,” the Columbia Accident Investigation Board declared in its 248-page report, released in August.

Although the board gave NASA a harsh public scolding, its report could have gone further — by permanently grounding the shuttle, or at least setting a deadline for its retirement. Instead, the report enables NASA to continue its dysfunctional dependence on the aging spacecraft. Although the board called for dozens of changes to the shuttle program and recommended that NASA develop a replacement, it also mapped out an escape clause — a recertification process that would allow the shuttle to continue operating beyond 2010.

Meanwhile, with the shuttle grounded at least until September, human spaceflight continues, suggesting that the shuttle is not as
crucial as NASA insists. Russian Soyuz craft are ferrying astronauts to and from the International Space Station, and Russia’s unmanned Progress ship has delivered supplies. The European and Japanese space agencies
are developing unmanned vehicles that will carry cargo to the station.

NASA itself has drawn up design requirements for an Orbital Space Plane, which could carry crew to and from the station, and has funded the development of concepts for a robotic cargo vehicle. Together, the two craft could do everything the shuttle does, except deliver bulky expansion modules to the ISS. So what’s taking so long? Politics get in the way. The shuttle program employs more than 18,000 people in congressional districts across the country. It takes this enormous workforce to service the tiny fleet — only three shuttles remain after the demise of Challenger and Columbia — because each vehicle has more than 2.5 million parts, many of which have to be replaced or refurbished after each flight.

But by taking what appears to be the most conservative path — holding fast to the shuttle — NASA may ultimately risk everything. If another aging craft deconstructs with astronauts onboard, the agency could forfeit its public support and funding. “A third shuttle disaster may mean the end of human spaceflight in the United States,” warns Greg Klerkx, author of the new book Lost in Space: The Fall of NASA and the Dream of a New Space Age. “We already have a generation whose lasting memories are of two disasters.”