The bad things that would happen if we launched nuclear waste into the sun. 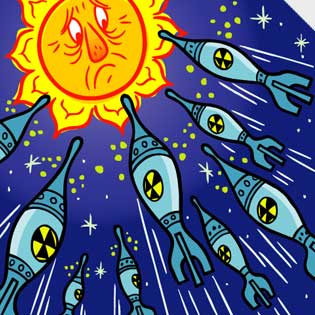 A reader inquires: Why don’t we just take all the nuclear waste, throw it into a rocket, then launch the rocket into the Sun? Would this make the Sun explode?

Let’s start with the last part of the question first: Would all the nuclear waste on Earth cause any sort of damage to our Sun? The answer is an emphatic no. The Sun would not care one whit about anything we could throw its way, primarily because the Sun is large, and we, in cosmic terms, are quite small. The Sun already contains far more uranium (a major component of high-level nuclear waste) than we could ever dig up here on Earth. Measurements of solar composition put the amount of solar uranium at as much as one hundred billion billion (1020) tons, which is, even as an upper bound, a whole lot of uranium. Makes our little nuclear waste problem seem positively trivial by comparison.

Except that it’s not. There are currently about 45,000 tons of nuclear waste stored in 131 sites across the country. By 2035 the total amount of nuclear waste is expected to grow to more than 115,000 tons. This waste — mainly in the form of spent commercial fuel rods — is highly radioactive and dangerous and will be for tens of thousands of years. Most scientists and policymakers advocate storing the waste deep under Nevada’s Yucca Mountain, which will, it is hoped, hold the material, undisturbed, until the
effective end of time. Yet the first
shipment of waste will not arrive in Nevada before 2010 at the earliest.

Until that time, all the waste produced at nuclear powerplants will continue to be stored at those plants, which has raised fears that a terrible malfunction — accidental or not — could release nuclear waste near populated areas. And so we turn to other options, such as our reader’s solar launch plan, to get rid of this stuff.

One hitch: The vehicles we rely on for space transport have a terrible
tendency to explode at the most inopportune times. A series of six rocket failures within nine months in 1998 and 1999 destroyed about $3.5 billion worth of military, communications and imaging equipment. In the tail stretch of that streak, four exploded in five weeks. And while overall rocket failure rates are far lower — depending on the program, rockets launch successfully about 95 percent of the time — the explosion of any rocket holding a significant amount of nuclear waste would be, to say the least, far more problematic than the loss of a weather satellite.

Take, for example, the Delta 4, one of the newest and most powerful
rockets on the planet. In its Heavy configuration, the Delta 4 can lift nearly 29,000 pounds into geosynchronous orbit (most rockets can’t lift half that). But even with this huge capacity, it would still take about 3,100 flights to lift the 45,000 tons of nuclear waste now in storage out into the solar system. Give the rocket a generous 99 percent success rate, and you’d still expect to see 31 rockets carrying 450 tons of nuclear waste explode in the upper atmosphere before the job was done. This is risk analysis, and in this case, serious catastrophe is nearly guaranteed.