The Office of Research Integrity -- a.k.a., the Fraud Squad -- is on the case. 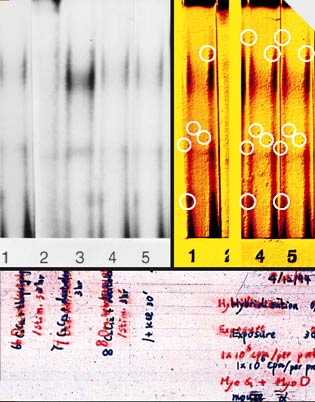 by Courtesy Office of Research Integrity

CAUGHT IN THE ACT
Government science cops pore over images pixel by pixel for signs of fraud, as these recent cases show.
EXHIBIT A: A doctored protein blot (left) from a prostate cancer study at the University of Michigan. Image-editing software adds color and shadowing, revealing a series of suspiciously similar bumps (right).
EXHIBIT B: A falsely labeled autoradiograph (bottom) passed off as proof of an experiment on mice. Digitally enhanced film shows that the original labels (red) had been rubbed off, revealing unrelated data on chicks.

Cancer researcher Kenneth Pienta was flipping through a paper written by a promising young postdoc in his University of Michigan laboratory when he spotted something that made his stomach sink: two protein blots that looked remarkably similar.

Pienta knew there could be only one explanation for the identical images: The woman had doctored the data. He quickly notified university officials and then confronted his postdoc, who insisted she had done nothing wrong. Was she telling the truth? If not, could her other papers be bogus too?

Enter Alan Price and the U.S. Office of Research Integrity (ORI). When federally funded scientists are accused of doctoring, making up, or ripping off research,
it often falls on Price and his little-known nine-person fraud squad to get to the bottom of it.

Chicanery is rare in science, but hardly new. Sir Isaac Newton, Benjamin Franklin and Gregor Mendel have all been suspected, posthumously, of fudging or inventing some of their findings. In 2002 physicists were sent reeling after hotshot Jan Hendrik Schon of Bell Laboratories was found to have rigged groundbreaking molecular electronics research. And this June, Steven Leadon, a respected University of North Carolina geneticist, resigned after evidence surfaced that he faked the findings of a major 1998 breast cancer study.

Price and his team investigate only researchers funded by the National Institutes of Health and other Public Health Service agencies; even so, these are hectic times. According to a new ORI report, universities, hospitals and other institutions launched 83 scientific misconduct investigations in 2002 — the fourth consecutive annual increase. “I don’t want to call it a crime wave,” says Price, 61, director of ORI’s Division of Investigative Oversight, “but there’s something going on.” What’s behind the trend, he says, is anybody’s guess.

Like most of his team, Price was a scientist before turning sleuth; he studied viruses at the University of Michigan. He joined ORI in December 1989, a career change he’s never regretted. Fighting fraud “is like figuring out a mystery every day,” Price says. “We look for whiteouts in notebooks. We look for things ripped out or pasted over other things. It’s hard not to enjoy this work.”

To make the leap from the laboratory, Price and his team first had to survive a boot camp run by former FBI agents, who drilled the scientists on evidence gathering, interviewing strategy and other basic gumshoe techniques. “FBI agents would tell us, ‘Most criminals are not brain surgeons,'” Price says. “Well, some of our
people are brain surgeons.”

Over the years ORI investigators have developed a few sophisticated techniques and specialties of their own.

John Dahlberg, a former AIDS researcher, is the team’s numbers guy. His specialty: slogging through mind-numbing data in a suspect’s lab notebook to dredge up evidence of misconduct.

One technique he uses is called digit frequency analysis. The concept, he says, is simple. Most scientific data contains elements of randomness, which the human brain has a difficult time duplicating. So when a scientist is trying to invent data, he’ll often write the same number over and over again. To spot deception, Dahlberg feeds suspect data into
an ORI software program called DigiProbe. The program graphs how frequently each digit appears. When he sees spikes in the graph, indicating some numbers are popping up more often than others, it’s usually a tip-off he’s looking at spurious science.

But numbers aren’t the only thing scientists fudge. A few offices down from Dahlberg sits John Krueger, ORI’s image analysis expert. Using Adobe Photoshop and other image-editing tools, the former biomedical
engineer scours Western blots, audioradiographs and other visual staples of biomedical science pixel by pixel for signs of tampering.

One of Krueger’s easiest and most memorable cases involved an image of a tree-like brain cell that a young scientist had submitted in an NIH grant application. Reviewers were instantly suspicious. What the applicant didn’t know was that the image he claimed to have created was the Mona Lisa of science: a portrait of a Purkinje cell so famous it graced the front of science journals, textbooks and even NIH
T-shirts. Krueger later proved the researcher grabbed it off the Net.

Scientists caught cheating rarely face criminal charges but find it difficult to return to the lab. Schon, the former Bell Labs superstar, is rumored to have fled to his native Germany. Kenneth Pienta’s postdoc was barred from government-funded research for five years. “One of my respondents,” Dahlberg says, using the ORI lingo for cheats, “became a banker.”