Places to Go, Things to Do 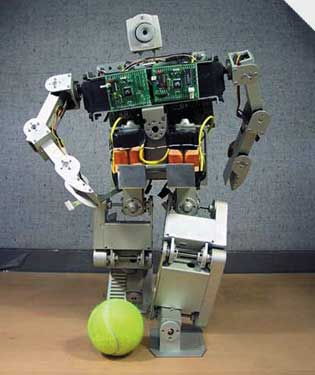 If you have an itch for travel and some extra cash burning a hole in your wallet, October offers plenty of adventure for the curious.

Watch as teams of robots compete for supremacy in the ROBOT SOCCER WORLD CHAMPIONSHIP, where some of the globe’s most advanced robotics laboratories field teams of micromechanical football players. This year’s event is in Vienna, Austria, from SEPTEMBER 28 UNTIL OCTOBER 3.

Further afield is the LOEBNER PRIZE COMPETITION, happening at the University of Surrey, in Guildford, England, on OCTOBER 18. The $100,000 prize will be awarded to the first artificial intelligence program to pass the Turing test by fooling a panel of human judges into mistaking it for a human. Further adding to the intrigue is the rift in the AI community over the prize. AI expert Marvin Minsky’s “Loebner Prize Revocation Prize” will award $100 to the first person to convince Loebner to stop holding the annual competition, which Minsky thinks is a distracting waste of time.

The IG NOBEL PRIZES, the funnier third cousin of the traditional Nobels, will be awarded on OCTOBER 2 at Harvard University. As the awards for achievements that “cannot or should not be reproduced,” last year’s Ig Nobels honored, among others, a comprehensive survey of belly button lint and a dog-to-human translation device.