A new X-ray machine sizes up all the damage in seconds. 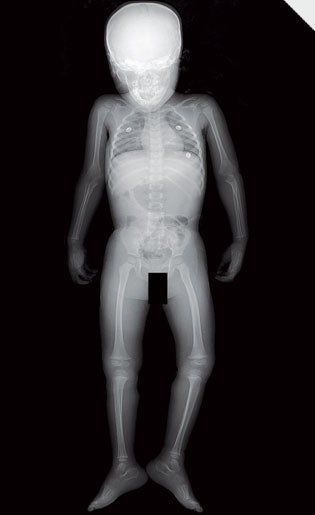 This X-ray* shows the skeletal structure OF an 8-year-old boy. The image was generated in 13 seconds using the statscan (below), a digital radiography machine made by Lodox Systems. *Modified for delicate sensibilities by the provider.

Finally, a scanner that keeps pace with the urban emergency room: The Statscan is a digital X-ray device that can produce a full-body image in 13 seconds. Compare that to conventional X-ray films, which take up to 45 minutes to develop and must be pieced together to make head-to-toe images.

Statscan was invented in South Africa during the mid-1980s as a quick, low-dose-radiation way to scan diamond miners to make sure they weren’t helping themselves to free samples. But the machine could have a more useful (and ethical) impact in trauma centers, where a near-instant diagnosis could mean the difference between life and death.

This summer the University of Maryland’s R. Adams Crowley Shock Trauma Center in Baltimore became the first facility outside South Africa to use Statscan. Though the Food and Drug Administration approved the X-ray device last October, an A-OK stamp from Shock Trauma, one of the nation’s top trauma centers, could propel the Statscan into widespread use in the United States.

The secret to Statscan’s speed: linear slot scanning technology. Whereas a traditional X-ray machine operates like a flashlight, shooting X-ray photons over a wide area, Statscan functions more like a laser pointer, emitting a focused X-ray beam from two millimeter-wide slots in a scanning arm. (The arm moves over and along the length of the body so there’s no need to move the injured patient.) The result: Virtually all “scatter radiation” is eliminated, so the device exposes the patient to 75 percent less radiation than a conventional X-ray machine does.

Using Statscan, doctors can know instantly where a bullet has lodged inside a victim’s body, and staff can screen patients quickly to determine whether they need a more complicated study of soft tissues, like a CT scan. And when a patient is out cold, unable to tell doctors where it hurts, the Statscan will speak for her in 13 seconds.