If the experiment doesn't work, it must be a miracle. 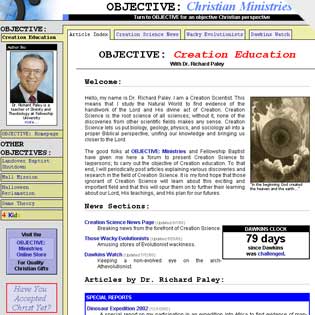 Earlier this year a debate broke out on the listserv of the National Association of Science Writers. Discussion centered around a certain Web site purporting to be the work of creation scientists. The group argued whether the site was real or a hoax. Some believed that even the most reactionary groups couldn’t be so ignorant; others couldn’t imagine who would have the time to create such an elaborate satire. Here’s but a tiny sample from the site:

Patricia Lewis (grade 8) did an experiment to see if life can evolve from non-life. Patricia placed all the non-living ingredients of life–carbon
(a charcoal briquet), purified water, and assorted minerals (a multi-vitamin)– into a sealed glass jar. The jar was left undisturbed, being exposed only to sunlight, for three weeks. (Patricia also prayed to God not to do anything miraculous during the course of the experiment, so as not to disqualify the findings.) No life evolved. This shows that life cannot come from non-life through natural processes.

(Note the delicious detail that the findings would have been disqualified if the results of the experiment had conflicted with the hypothesis. Scientific method, indeed.)

And so, fair reader, we turn to you. Is the site a hoax? Check it out. Then e-mail your thoughts to fyi@popsci.com. Or turn to the National Center for Science Education’s site for some real science.