Twenty Minutes to Positive or Negative 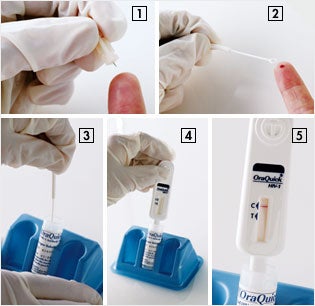 A lancet draws a blood droplet (1), which is scooped up by a plastic specimen loop (2). the sample is mixed with a developing solution (3). A test-reading device is dipped into the viAL and sits for 20 minutes (4). a single pink line at the control area (c) means the test is negative (5).

An estimated 200,000 Americans don’t know they are infected with the human immunodeficiency virus, or HIV. Now the government is banking on the vast distribution of an on-the-spot HIV test, called OraQuick, to make those unaware of their condition aware. And fast.

Testing, of course, has long been a critical piece of HIV prevention campaigns–those who learn they have the virus are far less likely to pass it on to others. But a traditional lab-based test requires
a large blood sample, which must be drawn by a medical professional, and necessitates a two-week wait for results. Each year, an estimated one-third
of those who test positive never return to check their status, says Dr. Bernard Branson of the Centers for Disease Control and Prevention.

With OraQuick, there’s little time for second thoughts. Anyone with simple training can administer the test, which is as easy as pricking a finger, and the results appear in less than 20 minutes. The test has an accuracy rate of 99.6 percent, on par with conventional tests. Since the FDA approved its use in hospitals and clinics last November, the rapid test has received uncharacteristic praise from public health officials. The CDC, for instance, has made OraQuick the centerpiece of a $35 million push to revamp federal prevention efforts. The agency recently purchased 250,000 kits from manufacturer OraSure Technologies for nationwide pilot testing.

At the heart of the test: a strip of noninfectious synthetic proteins built to mimic structures found inside and outside the HIV virus. If HIV antibodies are present in the blood sample, they attack and bind to the proteins, triggering two pink lines to appear on the testing device. The basic science needed to invent the test, says OraSure chief science officer Sam Niedbala, took nearly 20 years of collaborative work by worldwide research teams. There were also social hurdles to clear, mainly the possible dire consequences of a positive reading with no counselor on hand. (For that reason, you won’t find OraQuick at your local drugstore.) Next, the company hopes to make testing even easier by replacing OraQuick’s lancet with a cheek-swabbing device that is currently in clinical trials around the country.