Putting the Human in Humanoid 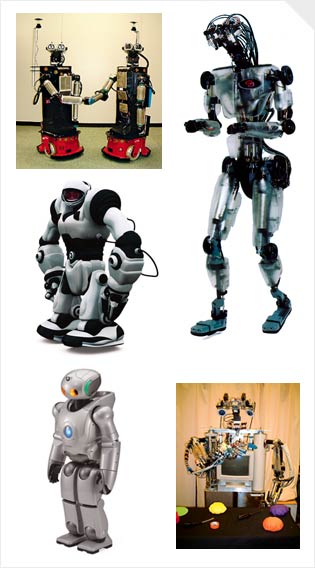 Movie humanoids, from C3PO to the Terminator, have long been able to see, hear, think, and socialize. Today’s real-life humanoids–robots with the mechanical equivalents of eyes, head, arms and hands–are finally beginning to catch up. The five bots here are the standard-bearers.

Robovie
Robovie was designed as a personal companion by Hiroshi Ishiguro’s team at the Advanced Telecommunications Research Institute International in Kyoto, Japan. It turns to face a person who’s talking to it, maintains appropriate social space during a conversation, points to objects with its finger, and bends down to play with children.

DB
Perhaps the most agile humanoid, the life-size DB, designed by Sarcos Research Corporation, can balance a pole on its palm, juggle, and perform an Okinawan folk dance. It does some serious science too: Stefan Schaal’s team at the University of Southern California uses it to test theories of motor control-how the brain plans and generates movement.

ISAC
It resembles an animated junk heap, but ISAC makes up in creativity what it lacks in looks. Designed by Alan Peters and colleagues at Vanderbilt University, ISAC can express simple emotions and has both short- and long-term memory. Soon, it may even “dream,” shuffling its neural connections just as we do when we’re sleeping, which could help it devise
creative solutions to thorny problems.

Sony’s Dream Robot
It’s only two feet tall, but Sony’s Dream Robot can wake you up in the morning, tape a television show for you, and ask how your day was. SDR-4X, the latest version, sings, dances, and recognizes voices and faces. It’s due out in the U.S. within the next two years-at a cost rivaling that of a luxury car.

RoboSapien
RoboSapien’s novel engineering allows it to do kung fu moves, pick things off the ground in less than a second, and run “so fast it scares cats,” says de-signer Mark Tilden, a robot physicist at Wow Wee Toys, a division of Hasbro. Instead of using computers to calculate how to move, the 14-inch-tall RoboSapien, which will retail for about $80 when it hits stores later this year, uses analog transistors to react to signals from the world around it.