A Spielberg in Your Own Mind

If eyewitness memories are missing, the brain makes them up, and scanning technology has a hard time telling real from fake. 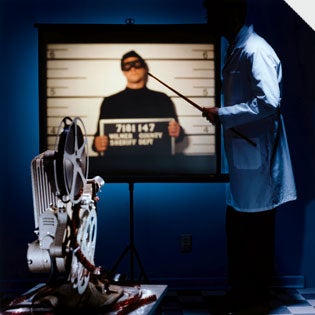 Sitting in her office at Claremont Graduate University in California, cognitive psychologist Kathy Pezdek flips open a case file for an upcoming homicide trial-a drive-by shooting in which the victim’s girlfriend will take the stand to identify the accused. The defense has retained Pezdek as an expert on the reliability of eyewitness memory.

“For starters,” says Pezdek, “I see here that the first time the girlfriend talks to the police, she tells them, ‘I didn’t actually see the guy’s face.’ “

That’s a problem for the prosecution, obviously. Within hours of the crime, however, police pull someone off the street, stick him in a squad car and show him to the witness. “It could be him,” the girlfriend says.

Two days later, she views a photo lineup. “Of course,” says Pezdek, “she picks out the only guy who would look familiar to her.” It’s the man she saw in the police cruiser. “And the police tell her, ‘Yeah, you picked the right guy.’ “

Pezdek has no doubt that, with coaching, the prosecution will have a confident eyewitness on the stand. “Problem is, the jury hasn’t seen her progression from ‘I never saw his face,’ to ‘it could be him’ to ‘yes, I’m sure.’ “

In other words, the prosecution will present to the jury a fine courtroom drama, sans the editing job that produced the final cut.

Our memories are, to some degree, like a final-cut videotape: Research confirms that each of us continually edits and splices recollections, replacing one “picture” with another, sometimes with a little outside assistance. “Memory is a creative event, born anew every day,” says Elizabeth Loftus, a University of California, Irvine, psychologist who is a leading expert on the malleability of eyewitness testimony. “You fill in the holes every time you reconstruct an event in your own mind.”

The trick works on the public at large too. Forensic psychologists weren’t surprised that what seemed to be a mass hallucination followed the first D.C. sniper shootings last fall. Jumpy residents jammed the FBI’s hotline with recollections of white vans and box trucks brimming with guns. All it took to set the editing rooms working were news reports of such a vehicle seen speeding away from an attack.

Not that prompting is even necessary. According to memory-reconstruction expert Charles Weaver at Baylor University, we tend to alter a few details of memory with every early replay. Moreover, the retouch job of a vivid imagination can come across as far more compelling than the washed-out “first take” of our physical senses.

“Eventually, people seem to get their personal story together and stick by it,” says Weaver. “But in essence, they’ve created a memory after the fact.” Weaver’s studies also show that people tend to become more confident each time they repeat their story. Hence, lawyers prep eyewitnesses: Rehearsal leads to testimony uttered with useful confidence. Throw in a few leading questions, and you have a polished, custom-edited eyewitness account.

A few weeks after Sept. 11, 2001, Pezdek and Weaver began asking hundreds of college students to recall what they saw and felt on the day of the terrorist attacks. More than 70 percent remembered seeing footage of the first plane striking the World Trade Center. Many recalled feeling rage toward Osama bin Laden. In fact, neither the footage of the first plane nor hints of al Qaeda’s involvement became available until the day after the attacks. So much for the idea that traumatic events sear “flashbulb memories” into the circuitry. Our brains process and edit trauma just like everything else.

In some ways, though, the analogy to video replay can be dangerously inaccurate, as it suggests a library of retrievable, real footage. “Unfortunately, that’s just how people tend to think of memory,” says Loftus, “that we all have these videotapes of events stored somewhere in the brain if only we can find them.” In fact, we assemble our memories by patching together broken pieces of stored information and then filling in the blanks.

One has only to view a brain-wave animation of a person viewing a familiar face to see what Loftus means. The act of remembering that face produces a flickering aurora borealis of electrical activity as the brain tries to assemble disparate bits of information pulled from every lobe of the cerebral cortex rather than a single storage place.

Most sensory information never really moves into storage at all. Like shapes drawn with a flashlight in the night air, the great mass of input from our eyes and ears fades almost immediately. Actively paying attention can buy you another 15 to 20 seconds of accurate recall by moving sensory input into short-term memory. Language appears to play a crucial role in moving memory into long-term storage, which is why the socially adept repeat the names of those they’ve just met. Without the “translation” of language, bits and fragments of input may make it into storage, but pulling those bits together for, say, testimony at a trial may prove problematic. When the brain can’t find an intact memory, it does the next best thing-it builds one.

The terrible uncertainty of eyewitness accounts raises the question of whether science can develop a hard-wired assist for the wetware between our ears-a machine to sort false memories from real. Recent brain-scanning data suggest it may be possible, but tricky.

For years, neuroscientists trained scalp electrodes and imaging machines on the hippocampus, a small lump of gray matter deep in the brain. Known to be a memory center, the hippocampus lights up in brain scans when people look at something new or later try to remember its appearance. Early efforts centered on the hope that accurate recollections would trigger more activity in the
hippocampus than would false ones, but researchers
discovered that an implanted false memory was indistinguishable from a true one. Then, in 2001, Harvard neuropsychologist Daniel Schacter found that an obscure part of the brain known as the parahippocampal gyrus does, in fact, light up for true but not false memories. The work remains preliminary, but it suggests that a false-memory detector remains at least theoretically possible.

Meanwhile, juries weighing eyewitness testimony may do well to stop by the local art-house cinema for a group viewing of Rashomon.