A Robot Gets Down and Dirty 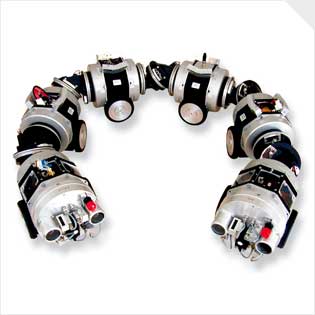 Meet MAKRO, the world’s first untethered robotic sewage pipe inspector. Developed by researchers at the Fraunhofer Institute for Autonomous Intelligent Systems in St. Augustin, Germany, MAKRO’s segmented, wormlike design gives it unprecedented mobility, allowing it to maneuver around sharp bends and climb over soggy refuse, tree roots, even stairs, says designer Hermann Streich. Existing sewerbots are leashed to power supply cables and can only move forward. The 2-meter-long, waterproof MAKRO, on the other hand, is completely wireless and two-headed so it can navigate in reverse; it’s also equipped with sensors, cameras, and a 166MHz Pentium II main processor that help it prowl in the dark and videotape pipe defects. A prototype will make a test run in some of Germany’s 360,000 kilometers of public sewage pipes this summer.

MAKRO’s “eyes” consist of infrared and ultrasound sensors embedded in its identical head and tail segments.
The sensors, coupled with artificial neural networks and a pre-programmed onboard mapping system, help it navigate in the dark, spot obstacles and modify its course in real time.

Six wheeled segments made of
aluminum and plastic and connected
by ball-and-socket joints form MAKRO’s body. Each joint houses angle sensors and three motors that can rotate the joint 90 degrees in any direction.

To document pipe defects, MAKRO is equipped with an underwater video camera and a pen-size crosshair laser (red) that projects light into the tunnel. The robot’s onboard processor detects distortions in the crosshair–a sign of an obstacle or pipe abnormality–and commands the camera to snap images. The laser also complements MAKRO’s other directional sensors. A pair of 12-volt battery packs allow the robot to roam solo for two hours.