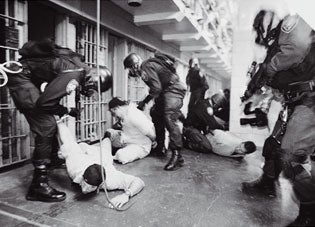 Fifteen convicts are rioting in J-Block. They’ve already beaten one officer to a pulp, and a murderous 24-year-old named Kevin Maloney has a homemade knife to the throat of a second. The time for negotiation is over. Adrenaline pumping, weapons ready, helmets and gas masks on, 12 corrections officers and I take position under a set of stairs. “I need a yard of separation,” Captain Carl Sims whispers over the radio to Batina Thornhill, our negotiator. A moment later, she gets it for him, tricking Maloney into approaching her without his hostage. “Look,” she says, “we don’t want this going south.”

Those are the words we’re waiting for. We rush in under the deafening force and blinding light of flash-bang grenades as an aerial assault team rappels down from the third floor. In the two seconds it takes me, the last man, to enter J-Block, the situation has changed utterly: Maloney lies dead near the door, and the 14 other convicts lie prone on the floor around him, their rebellion snuffed out in an instant of technological and tactical dominance. So impressive is the display that only when Maloney’s corpse stands up, smiles, and says, “Good job, you guys!” am I reminded that this is a training exercise.

Or should I say a product test? Every spring more than a thousand corrections officers from around the country gather here at the former West Virginia Penitentiary–a dungeon-like facility whose tiny cells, deemed cruel and unusual punishment, led to its closing in 1992–to sample the latest in prison technology. This year’s event, the seventh annual Mock Prison Riot, features 84 high-tech products in a renovated factory in the north yard–everything from a portable hands-free metal detector to a small robotic surveillance helicopter. During the next three days, 18 correctional tactical units will put them to the test in “near real” scenarios like the J-Block hostage situation in which I’ve been embedded with the Gwinnett County, Georgia, Rapid Response Team. And to make sure officers understand both sides of the equation, almost a third will get the chance to play riotous inmates. Maloney, now shaking hands with his conquerors, has just set the standard.

The explosive growth of the Mock Prison Riot, which debuted in 1997 with just four technologies and 50 officers, parallels the staggering expansion of our nation’s prison population. In 1982 the United States held 610,272 prisoners in jails and prisons. By 2002 that number had more than tripled, topping two
million. “Each officer now has a heavier load on the job,” says Wayne Barte, project manager for the National Institute of Justice’s Office of Law Enforcement Technology Commercialization, which runs the mock riot. “Technology helps them keep inmates under control so that we don’t have to invoke force.”

When corrections officers do employ force, rarely is it in response to an actual riot, of which there are only about 12 per year in the United States, according to Bert Useem, co-author of States of Siege: U.S. Prison Riots 1971â€1986. The more immediate threat comes from individual assaults, especially those carried out with homemade weapons. David Locklear, the veteran marine who shot Maloney in J-Block, has seen blades fashioned from cigarette butts (all it takes
is repeated whacks on a concrete floor), explosives concocted from nondairy creamer, and ice picks molded from toilet paper (“Wet it, work it, wet it, work it, and you can make it deadly,” he explains). “We have to constantly stay on top with superior tactics and technology,” says Sims.

In the J-Block scenario, that tech took the form of a flexible scope to look around corners, into cells, and under bunks without entering the riotous cellblock; a pinhole spy camera embedded in an everyday communications device to provide real-time images of convicts’ movements; and flash-bang grenades to create the confusion we needed to overwhelm the rioters with brute force.

That last part, however, is what worries me on day two when I play lead hostage-taker in the Gwinnett team’s second training scenario. Sweating a bit, I brief my fellow conspirators on our mock crisis: We’ve killed an officer and taken a second one hostage with her own gun. We’re hiding in a doorway, waiting for the Rapid Response Team to comply with our demand for a getaway van. When it arrives, we’ll reach it by crossing the prison yard under a blanket so snipers can’t pick us off without endangering our hostage. Then it’s straight out the front gate.

The van arrives. I press my fake gun to the hostage’s temple, duck under the blanket, and race with my cronies across the yard. Negotiator David Saunders follows us from behind a large, mobile bulletproof shield, ostensibly trying to talk me down. Really, though, he’s jockeying for time as the Gwinnett County team gets into position. Then, when we’re within sight of the van, he utters those seven dreadful words, which, alas, I already know: “Speed, we don’t want this going south.”

BAM! Everything happens at once: Stun grenades go off at our feet; the blanket is ripped off, revealing the entire Gwinnett County team standing in a phalanx not 10 yards away; and Locklear kills me with two dozen blank rounds. I collapse to the ground, startled they had gotten so close, so fast, with so little warning. I knew exactly what to expect–and yet I didn’t have a chance in the world.

FOR THE GUARD WHO HAS IT ALL

According to Captain Carl Sims, an intense Air Force Special Ops man turned prison tactical unit commander, the best way to bring down a riot is through a combination of speed, surprise and violence of action. But the trick is never to let it develop in the first place.

“We measure success by how many times we don’t have to use force,” he says. Most of the 84 technologies on display at Mock Prison Riot were built on that principle–to preempt overwhelming force–but a few rose to the top. Here they are.

Frisker Pro (Paradigm Tactical Products). Wand metal detectors, like those used at airports, are no good in prisons–officers need both hands free. This device, which consists of little more than a 9-volt battery and a mini magnetometer, straps to the palm of your hand and vibrates when it’s near metal, such as a safety pin concealed in a prisoner’s mouth or a shank tucked into his sock.

Bone Conducting Tactical Headset (Sensory Devices). Rowdy cellblocks drown out radio communications. This headset circumvents the problem with vibrating pads on either cheekbone. In speaking mode, the pads record voice waves resonating through the skull.
In listening mode, they vibrate the cheekbones, sending audio signals to the middle ear.

Voice Response Translator (Integrated Wave Technology). English is a second language for many inmates. This device attaches to a megaphone and translates up to 1,000 phrases like “Return to your cell” and “Stop, or I will use force” into up to 50 languages.

SA200 Semi-Automatic Launcher (PepperBall Technologies). Unless a hostage’s life is at risk, officers prefer to use “less than lethal” force. This 33-inch rifle employs compressed air to shoot pepper balls at 380 feet per second–enough to topple a target without breaking his skin. On contact, the balls release pepper powder, which causes retching and crying.

WRSX-Stream, “The Big Stick” (Hydro-Force). When prisoners get rowdy, it’s important to quell the commotion before it becomes a riot. This 10-foot-high box can debilitate an entire yard of unruly inmates by turning fire hydrants into pepper-spray water cannons.–W.S.W.

The Mock Prison Riot is off-limits to everyone except corrections officers and the occasional brave criminology student. But there are places, both real and virtual, where you too can lead an escape, spend the night in a dank cell, or engage a well-armed enemy behind prison walls. Here’s where to start.

The Great Escape, Gotham Games • You’ve been placed in a German prison camp and must lead four Allied officers, including a likeness of Steve McQueen from the 1963 movie, to freedom. Available July 22 on PC, PS2 and Xbox; $49.