From the Mouths of Babes: Eureka! 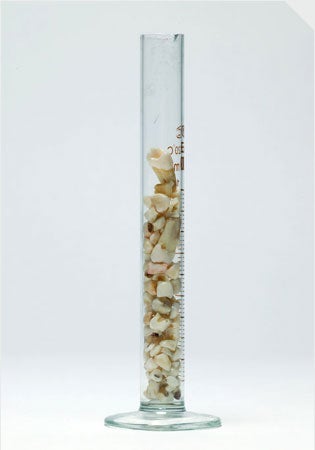 Photography by John B. Carnett

These 60 baby teeth were shed by PopSci editor Jenny Everett and her four siblings. The aging stash is too stale to mine for stem cells.

Baby teeth may be far more valuable than parents imagined: Scientists have discovered they´re chock-full of stem cells, those seemingly magical precursors of heart, nerve and most other cell types. The find means parents may someday encourage kids to put their baby teeth into protective storage-not under a pillow-for future treatment of injuries and diseases, says Songtao Shi of the National Institute of Dental and Craniofacial Research, who led the research.

It may also give scientists a much needed alternative source for stem cells, which are mostly harvested from embryos–a process that has come under intense scrutiny from anti-abortion groups. So far, researchers have been able to coax baby-teeth- derived stem cells into nerve,
bone and tooth-forming cells, and Shi says the cells may someday make it possible to grow new bones or to treat nerve-related
diseases like Alzheimer’s.

Shi, a pediatric dentist by training, says it all started when his daughter, Julia, lost her first tooth. When holding the tiny incisor in his hand, Shi suddenly spied a speck of scarlet tissue nestled deep inside. He thought it might be pulp tissue, which is choked with blood vessels and nerves that keep the bone healthy. In adults, the pulp is also where stem cells are known to hide. So when Julia´s next tooth popped out, Shi hustled it to his lab, where a closer look revealed several stem cells amid the tissue.

Pamela DenBesten, a stem cell researcher at the University of California at San Francisco, calls the discovery potentially significant. “This could put the tooth fairy out of business,” she says.