All About the Bike 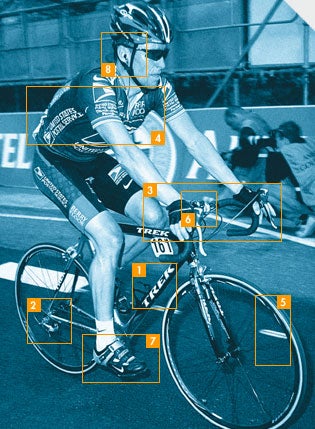 Freakish lung capacity and iron will aren’t the only factors behind Lance Armstrong’s phenomenal success. He’s also one of the most tech-obsessed racers on the circuit. Slick gadgetry (most of which you too can buy) will aid every aspect of the 31-year-old Texan’s bid to win a fifth consecutive Tour de France title in July. An ultralight carbon fiber bike frame, wind-tunnel-tested aerodynamic handlebars and a 57-function bike-mounted computer are just a few of the tech innovations he’s betting on. Whether such an arsenal of enviable cycling gadgets will help Armstrong win the three-week, 2,010-mile race is hard to say. But this much is certain: If Lance rides it, the gear must be worthy.

1. FRAME: Armstrong will mount a prototype Trek OCLV 2-pound
carbon fiber frame for the tour’s 17 long-distance road stages. The rig sports an aerodynamic fin that extends toward the rear wheel, and multishape top and down tubes that keep the frame’s weight low while maximizing stiffness and handling. It will retail next fall for about $2,500.

2. DRIVETRAIN: The drivetrain turns raw leg power into road speed while handling an average pro’s more than 100,000 yearly gear changes.
So it had better be efficient. This spring Shimano introduced a 10-speed version of its flagship Dura-Ace components (drivetrain and brakes). Among just a handful of racers to have Shimano’s 10th cog on the rear wheel, Armstrong will gain an additional two gears over his old system, helping him find just the right cadence on arduous mountain ascents. Also onboard: a lighter crankset and more ergonomic shift-and-brake levers.

3. HANDLEBARS: For the regular road stages, Armstrong won’t experiment with his traditional Deda Elementi aluminum bars, seen here. He will, however, try out new ultralight carbon-and-aluminum Bon-trager time-trial bars designed and tested in Texas A&M University’s
wind tunnel last November. The
bars position his arms close together and roll his shoulders down and
forward to minimize wind resistance. Put your wallet away: The handlebars are custom-designed for Armstrong’s singular anatomy.

4. DUDS: To beat the scorching July sun, Armstrong will slip on Nike’s new HC jersey. It’s 27 percent lighter than a standard Lycra or CoolMax top and combines three densities of fabric for superior ventilation. For the time trials, Armstrong will wear Nike’s new Swift Spin skin suit. It’s made of four types of patented Zoned Aerodynamics fabrics that cover different body parts, depending on their volume and exposure to wind. Nike’s apparel innovation director, Rick MacDonald, says
the suit could save Armstrong up to
a minute in an hour-long trial. It’s strictly for the pros, but the HC top
will retail for about $100.

5. WHEELS: Armstrong will spin a new wheel set made by sponsor Bontrager Wheelworks and Component. Dubbed the Triple X, it uses just 20 spokes in front and 24 in rear, making it lighter and more aerodynamic than a traditional 32-spoke wheel. Triple X wheels rely on feathery 11-ounce carbon fiber rims and hubs, and weigh just 3.75 pounds per pair, making them some of the lightest hoops on
Le Tour. Retail price: $1,600 per pair.

6. CYCLO-COMPUTER: A handlebar mounted computer will continually feed the racer updated numbers on his heart rate, altitude, ambient temperature, speed and more. The 57-function HAC 4 Plus computer made by the German company CicloSport retails for $420 and adds just 2 ounces to
the bike’s total weight.

7. SHOES: Armstrong spends perhaps 1,500 hours a year in his cycling shoes, so they’ve got to fit perfectly. This January he took delivery of two pairs of size-9.5 hand-made custom Nike shoes. Synthetic kangaroo-leather uppers, ultrastiff soles made from seven layers of carbon fiber, and a Pebax resin heel/midfoot cage keep the weight to about 10 ounces per pair. The shoes will retail next year for about $250.

8. RADIOS: To keep tabs on Tour rivals and plan tactics, Armstrong and his U.S. Postal Service team will use credit- card-size Alinco DJ-C5T dual-band
two-way radios. This year the radios were specially configured (the team isn’t saying how) to avoid eavesdropping.