He Blows Things Up So You Don’t Have To 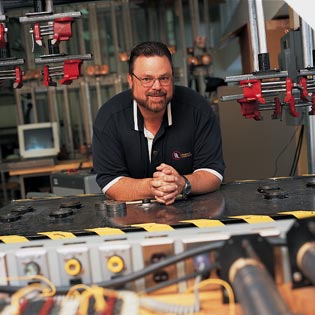 Job During his 19 years as a laboratory technician for Underwriters Laboratories, Cramer has set coffeemakers on fire, knocked computers off desks, short-circuited fans, and blown up everything from toasters to curling irons–all in the name of consumer safety.

Workplace UL’s testing facility in Research Triangle Park, North Carolina. A typical day might find Cramer conducting an endurance test on a chainsaw in the Noisy Room, freezing a light fixture to gauge cold-weather performance in the Fixture and Ballast Room, or smashing television screens in the Thrown Projectiles Room to see how far the glass flies.

Current project From behind a Plexiglas window, Cramer rolls metal ball bearings into an air cannon, which fires them directly into the bag of a lawnmower. If they tear through the bag, so too might rocks and debris. The bag holds strong: America’s shins are safe.

Critical tool He has several. Two of note are a 1.18-pound suspended steel ball in the Thrown Projectiles Room, which mimics a 22-mph fastball (effectively, the maximum destructive force of kids playing catch), and a power analyzer in the High Voltage Room, which can gauge, for example, whether a blow-dryer rated at 1,500 watts actually sucks down 1,800 (the difference between a good hair day and a blown circuit).

Greatest challenge With dozens of rooms recreating hundreds of worst-case scenarios, it’s tough to keep track of every safety protocol. And even if you do, mishaps still happen.
A few years ago Cramer sparked a fire by running an electrical current through what turned out to be a faulty power strip. He has been known as “Fire Truck Chuck” ever since.

Final word “Sometimes we’ll brew a hundred pots of coffee and everything will look normal. Other times four will burn up because we shorted out their thermal protectors. We’re a watchdog for the people, trying to protect them from themselves.”