Welcome to the Dollhouses of Death

Barbie's dead. Did Ken do it? How miniature death-scene dioramas are used to teach modern CSI techniques. 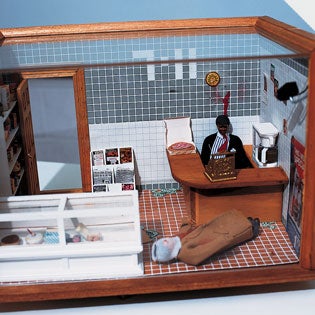 SHOOT-OUT AT THE CORNER STORE
A Mauriello-built crime scene diorama shows a robbery that went wrong when a masked thief attempted to flee, caught bullets from the convenience store owner and returned fire. Both died. The gilded till and modern coffeepot seem out of two eras, but note the finely detailed cash, publications and blood spatter.

After the class work in fingerprinting, ballistics and firearm identification, the laboratory exercises in blood spatters, tool marks, shoe prints and drag marks, the death-investigation lectures and the autopsy, the demonstrations in detecting and collecting trace evidence . . . after all that, when Tom Mauriello’s students have worked their way through every aspect of crime scene investigation in his renowned criminalistics course, it’s time to play with his dollhouses.

You won’t find anything at FAO Schwarz like Mauriello’s tiny, gory crime-scene reconstructions. They look at first glance like some sort of grotesque joke–violence-drenched outsider art, maybe, or Addams Family playroom props. Blood is spattered on a little wall. A tiny telephone receiver dangles off a hook. A red car idles in the closed garage, wisps of fiberglass exhaust curling out from the tailpipe. And, of course, there are bodies–on the garage floor, face up on the kitchen linoleum, slumped on a bloodstained carpet, tucked into bed with a Bible, a gun and a bullet between the eyes.

Mauriello teaches at the University of Maryland, College Park. Each of his six crime scene dioramas contains clues to preliminarily determine cause of death–accident, suicide or homicide–and each comes with a sort of dollhouse docent, a real live student supplied with reports and findings that are divulged when students ask the right questions.

In an era of computer-assisted 3-D blood-spatter pattern analysis and crash-scene reconstruction software, Mauriello’s dollhouse approach seems nostalgic. But he argues there is no substitute for hands-on experience–even if the hands are on a tiny rubber deathbed figure, a German doll chosen by Mauriello because he could bend it into a rigor mortis pose and touch up its skin color with paint for telltale lividity. The dent in another doll’s head matches the shape of a nearby lamp, indicating blunt trauma.

“I teach my students to peel the crime scene,” he says. “I want them to physically pull back the bedsheets, turn over the victim, examine the body, pull out the instrumentation in the laboratory and use it, even if it’s on a miniaturized scale.”

This is not something they can do at a real crime scene, he reminds them. “Access to a real crime scene is impossible. It’s closed off. You’d violate the integrity.” (Mauriello used to take over an entire university house and convert it temporarily into a life-size crime scene replica. It was a huge job, taking days to prepare. Dioramas are portable and reusable, thus much more convenient.)

There is precedent for Mauriello’s dollhouses. He modeled his miniatures after a set of 19 death scenes crafted in the 1940s and ’50s by the eccentric millionairess who founded Harvard’s department of legal medicine, the nation’s first university program in forensic pathology. International Harvester heiress Frances Glessner Lee created her famous “nutshell studies” for another of her pet projects–a yearly homicide investigation seminar that 40 to 50 of the nation’s leading investigators jockeyed to attend. Between each colloquium, Lee, an honorary captain in the New Hampshire state police force, retreated to her mansion in the White Mountains to construct exact one-inch-to-one-foot-scale recreations of real death investigations, all to challenge (and often stump) “her boys.”

Lee spent as much as $3,000 on each diorama–you could probably buy a full-size house for that amount of money back then–and equipped them with working doors, windows and lights. Magazines, calendars and prescription labels were finely printed. Bullets and shotgun shells were exquisitely miniaturized. Lee lovingly knitted the clothing for each victim, using two stickpins and sewing thread.

Jerry Dziecichowicz, administrator of the state of Maryland’s office of the chief medical examiner, which continues to host Lee’s Harvard Associates in Police Science seminars some 40 years after her death, says several of Lee’s most difficult dollhouses have since been retired. Too hard to crack, he says. “When you have a room full of guys with guns, you don’t like to keep telling them they’re wrong.”

In contrast to Lee’s finicky ship-in-a-bottle approach, Mauriello is not above using a gauze finger bandage for a hold-up man’s ski mask or the metal end of a mechanical pencil for a spent bullet casing. What his crime scene dioramas lack in obsessive perfection, however, they make up for in modern CSI context. Mauriello dabs his crime scenes with an invisible compound that fluoresces just as saliva or semen would when students scan with black lights. A student sharp enough to spot the stain of urine in the toilet of a hotel-room death scene can send it for DNA analysis, just as a professional crime scene investigator would.

Mauriello says it doesn’t take long to spot which students will have difficulty with a real death-scene investigation: They’re always the ones who are reluctant to touch. “In order to get the answers, they have to examine everything–look inside bedclothes, turn over dead bodies, pick up the newspaper on the floor to see the date.”

If you don’t play with the dolls, you won’t solve the crime.