Malaria kills an estimated 1 million people every year. Should scientists and policy makers attempt to genetically engineer the eradication of its prime carrier, the mosquito? 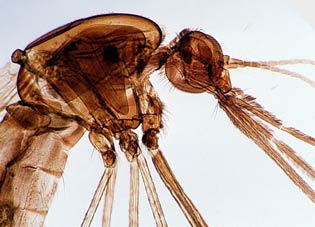 Just in time for summer, an evolutionary geneticist has devised a plan for what could be the world’s most lethal flyswatter. Austin Burt of Imperial College London, has shown how a genetically engineered “selfish” gene could eradicate an entire species of disease-carrying insects in less than a year.

For now, Burt’s strategy is limited to computer simulations, although he hopes to experiment on a lab-bound cluster of fruit flies later this year. If all goes well, he will move on to the Anopheles gambiae brand of mosquitoes, which he regards as an ideal target: They live for only a few weeks, mate frequently, and kill people. According to the World Health Organization, the malaria parasite kills more than one million people a year; its prime carrier is
A. gambiae. Mortality rates have been climbing over the past few decades, and the parasite has become resistant to many standard treatments, such as chloroquine. The disease is also a serious financial drain on hard-hit regions in Africa and areas of Central and South America.

Burt’s blueprint for genetically engineered extinction hinges on homing endonuclease genes (HEG), selfish genes found in sea anemones, algae and moss that thwart the laws of inheritance and natural selection. Normal genes have a one in two shot of being passed on to the next generation, but HEGs duplicate themselves from one chromosome to another, a trick that can increase their chances of being inherited to 95 percent, even though the genes confer no survival benefit.

Within the next couple
of years, Burt says, it will be possible to engineer a hardy HEG to knock out an essential gene in mosquitoes–
one that aids in the development of the head, for example. In theory, HEG mosquitoes released into the wild would invade healthy populations by mating with them. The first generation would
be born healthy (the wild mosquito provides the “normal head” gene), but would carry a silent copy of the HEG. When two HEG-carriers mate, lethal head deformities would be expressed in the offspring. The die-off would accelerate as HEG mosquitoes increased in the population.

The strategy works well as a computer simulation, but implementing it is another matter. For a 20-generation eradication, the lab-modified HEG mosquitoes would need to constitute 1 percent of the wild population at
the start of the experiment, and be dispersed evenly throughout an entire continent. “With existing methods, eradication is not an option, especially not in sub-Saharan Africa,” says geneticist Marcelo Jacobs-Lorena of Case Western Reserve University in Cleveland. Jacobs-Lorena cites
the difficulty of determining
the correct release points; miss
a few bugs, and the population booms all over again.

Moreover, set free in the wild, HEG mosquitoes could create
new and unexpected problems. “Once something is out there,
can you control it?” asks Sujatha Byravan, executive director of the Council for Responsible Genetics. “You have to worry about it spreading to other mosquito species.”

Many malaria experts doubt Burt’s plan will work, but they agree that neither humans nor other creatures would miss A. gambiae. The
mosquito is neither a significant pollinator nor a critical, reliable food source. “I doubt there’d
be significant ecological consequences,” says mosquito expert Frank Collins of Notre Dame
University. Convincing the world of that is another matter. Governments, international health officials and citizens living in malaria- affected regions will all need to be sold on genetically modified mosquito extinction. Until then, keep swatting.