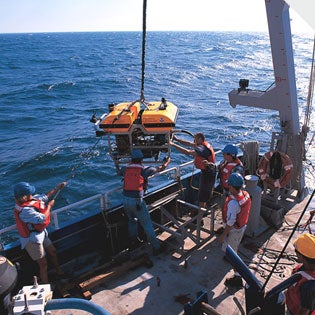 “Rarely is a shipwreck so well preserved,” whispers Sanctuary Manager Jeff Gray as the submersible Little Hercules inches toward the ghostly remains of a 19th-century schooner. Three wooden masts stand tall and surprisingly intact. Wood-stock anchors rest peacefully in catheads. Chains, batons and wire rigging lie scattered about the deck. And carved into the hull near the port-side cabin window, barely visible, is her name: Cornelia B. Windiate.

“It makes me breathe hard just looking at these things,” says C. Patrick Labadie, a historian and former director of the Canal Park Marine Museum in Duluth, Minnesota. “This is a snapshot of Great Lakes maritime history.”

As many as 116 schooners, steamers, and freighters — all from the 19th and early 20th centuries — punctuate the murky depths of the 448-square-mile Thunder Bay Marine Sanctuary and Underwater Preserve in Lake Huron. Somewhere among them, hope the 12 crew members I’ve joined aboard the R/V Connecticut (mother ship to Little Hercules), is the perfect candidate for the Immersion Institute, a new facility at the Mystic Aquarium & Institute for Exploration in Connecticut, overseen by renowned ocean explorer Robert Ballard. From here, thanks to an Internet tether, the public will be able to man the controls of a remote-operated vehicle to explore a shipwreck in the Lake Huron marine sanctuary. But first we have to find the right specimen.

Having probed the remains of the Windiate — which sank in 185 feet of water with all hands and 332 tons of wheat on November 28, 1875 — we head off in search of a Red Star steamer named SS Florida. But it’s the E.B. Allen, a wooden schooner that famously sank in 1871 after colliding with another ship in thick fog, that the team ultimately selects for the Immersion Institute. By 2004, it’ll be outfitted with above- and below-water cameras, as well as a submersible similar to Little Hercules.

The Institute’s first exhibit went live last June in Monterey Bay, California. Four cameras — one onshore pointed toward a rock outcropping popular with California sea lions, two submerged in 50 feet of water, and another attached to the robotic submersible Orpheus — send real-time images via microwaves to an Internet 2 terminal on the mainland. The images are then patched into the aquarium’s interactive theater, where visitors use a joystick to pan, tilt and zoom the cameras, as well as pilot Orpheus along 50 feet of cable to explore a kelp forest, go nose to nose with seals and check out odd creatures like bat stars and sea anemones.

Next up: above- and below-water cameras in California’s Channel Islands
— scheduled to go live from Anacapa Island around now — and the Florida Keys, opening later this year. What’s more, Ballard hopes to install immersion theaters in a handful of other museums and aquariums by year’s end (the locations are under wraps until the ink dries). “I’m trying to create a network to distribute reality,” he explains. “The more we put people in touch with our planet, the more they’ll understand it’s our life support system.”

That’s not all he has in store. “I don’t think we’ll stay exclusively marine,” he hints, referring to his interest in national parks like Yellowstone and Yosemite. “There are all sorts of places people will want to go to get away from it all.”