They're all in a day's work for Paul Sipiera. 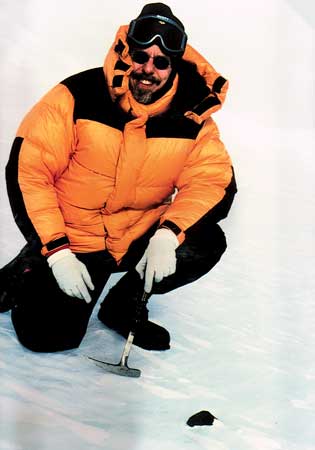 by Courtesy of Paul Sipiera

If Antarctica had a frequent-visitor club, planetary geologist Paul Sipiera would be a gold member. As a professor at William Rainey Harper College in Palantine, Illinois, and president of the Planetary Studies Foundation, he’s been to Earth’s southern edge seven times, most recently leading science-minded tourists on an 18-day expedition. He spoke to us about the weather, dodgy food and his plans to return.

Popular Science: What’s
the Antarctic connection
for someone interested in planetary studies?

Paul Sipiera: Meteorites, which are the only samples of Mars and asteroids we have on Earth. If one falls in New York, moisture reacts with the iron and corrodes it. But cold limits corrosion, so they last for 100,000 years in Antarctica. Also, meteorites churn through ice packs and are eventually uncovered by windswept snow, so they’re easy to find.

PS: Okay, you pocket a few meteorites. Then what?

Sipiera: I take them home for chemical analysis, looking at iron and magnesium concentrations. You never know what you’ll find. One looked normal, but turned out to be Acapulcoite, which is quite rare. We found another that had melted the ice around it, and the water was teeming with microbes. An expedition member is studying them now.

Sipiera: We fly to Chile and wait for a chartered transport, an Ilyushin cargo plane, which we take to the Patriot Hills base camp. From there, we’re airlifted in a World War II-era C-47 that’s fitted with skis. We tell the pilot our general destination, he picks a landing spot, and we cross our fingers.

PS: Sounds fun. I’m packing my bags. What should I expect?

Sipiera: Everything is a challenge. We live in tents. Sleeping on ice amplifies every ache and pain. Our open-air latrine is a seat on a tripod with a plastic bag underneath. The food is usually good, but on our last trip it was freeze-dried and left over from some other expedition. Once, in the mid-’80s, I sampled some Spam that had been canned in 1957. That was a terrible idea.

PS: Other than the Spam, what’s the worst that’s happened?

Sipiera: In 1983, a stove exploded in my tent, and I received second-degree burns on my face and hands. I was airlifted to New Zealand because the base doctor feared that I’d burned the inside of my throat, which is life threatening.

PS: When’s your next trip to the Far South?

Sipiera: Next January. But in April, I’m heading to the North Pole and to Devon Island, where the Mars Society has their Arctic Research Station.

PS: Describe a singular Antarctic moment.
**
Sipiera:** Standing somewhere that no one else has ever stood, drinking water melted from ice that’s a million years old.