3 radical ideas, but any real science? We ask the experts. 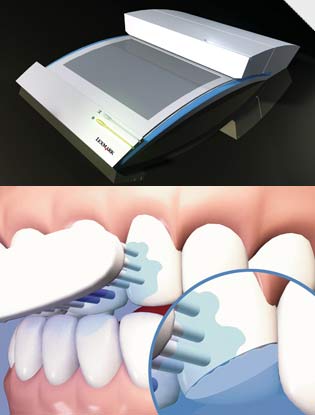 The Vision: “Print media doesn´t have to be static,” says Syracuse University´s Ryan Bednar, who with fellow student Nate Schaal designed a device that can “print” a multilayer electronic display-think 20 pages on a single sheet, with a Web-like interface. Key tech: Ink is embedded in layers of resin-apply a current and the desired page appears.

The Verdict: “The technology is not here today,” says Kathryn Gray, vice president of the National Society of Professional Engineers, “but I think it can happen. Young engineers will come up with it.” The timeframe, she predicts, will be five to 10 years.

The Vision: When you brush your teeth, they get thinner as the enamel wears down. Chemicals manufacturer BASF is looking to reverse that process by capitalizing on two booming industries: nanotech and teeth whitening. Hydroxyapatite toothpaste — a mixture of calcium hydroxide, phosphoric acid and water — rebuilds teeth, thanks to a fine nanopowder that binds to a tooth´s surface to fill holes. It could be ready in a few years.

The Verdict: “We need more thorough scientific studies,” says Laurence C. Chow of the American Dental Association. “Research indicates that hydroxyapatite does produce a whitening effect, but not as much as that produced by peroxide.”

The Verdict: “The problem is implementing it,” says Jerry Schneider, professor emeritus of civil engineering at the University of Washington. Transportation systems are complicated, especially in urban areas where there´s no room to add infrastructure. You also have to work with government agencies, deal with environmental concerns and fend off competition from rail, buses and cars. Most likely, SkyTran would end up as a private project, much like Disney´s once-ballyhooed monorail.