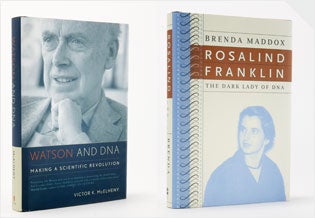 When I first learned about the structure of DNA in an undergraduate genetics class, my instructor-a British scientist and feminist-hammered one point into our heads: James Watson and Francis Crick did not discover the famous double helix alone. The x-ray photograph that led to their breakthrough came from the lab of a little known King’s College scientist named Rosalind Franklin. No one gave her credit for her work, my instructor said, so Franklin died in scientific obscurity.

This story has been passed on for generations, but two new biographies tell a slightly different story. In Rosalind Franklin: The Dark Lady of DNA (HarperCollins, October 2002) Brenda Maddox sympathizes with Franklin, but shows that she was not an innocent victim: Maurice Wilkins-Franklin’s colleague at Kings College who shared the 1962 Nobel Prize with Watson and Crick for discovering DNA’s structure-tried to collaborate with Franklin for years, though she spurned his attempts. Maddox brings Franklin to life as a brilliant but unhappy woman who never quite found her place in a male dominated field.

Author Victor McElheny reaches a similar conclusion in Watson and DNA: Making a Scientific Revolution (Perseus, January 2003). According to McElheny, there was nothing underhanded about the way Watson stumbled on the photograph that fueled their discovery-Wilkins showed it to him during one of many discussions Watson had with other scientists working on DNA. But as Maddox points out “it seems to have escaped (Watson’s and Crick’s) notice that while Rosalind’s work was fundamental to their discovery, she had not been consulted on its use.”

Franklin’s story is one of many in McElheny’s book-one of the first Watson biographies-which spans Watson’s career from the discovery of DNA’s structure to his recent and highly controversial role in the human genome project. McElheny paints Watson as the father of molecular biology, which is true in many ways: He trained many top researchers, and spent much of his career lobbying for funding and supporting for the field. McElheny portrays Watson’s well-know difficult personality, though his admiration for his subject shines through. That’s no surprise, since the two men have been friends for more than 40 years. But it didn’t stop Watson from refusing to be a source for McElheny’s book. Perhaps that’s why Watson and DNA relies heavily on previously published work-magazine articles, newspapers, books-and often reads like a dry report. Maddox’s book starts off dry, but becomes a great read once it transitions from Franklin’s uneventful personal life to her fascinating scientific career. Over all, both biographies make for a good read, and finally begin to sort fact from fiction in Rosalind Franklin’s role as “the dark lady of DNA.”