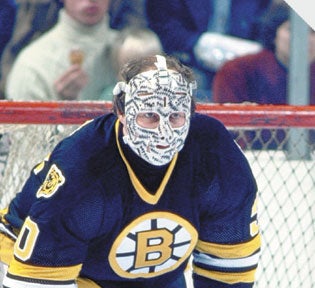 by Hockey Hall of Fame

Without a mask, those scars would be on goalie Gerry Cheevers´ face.

The shots of hockey´s hardest shooters travel at slightly more than 100 mph.

On a relatively long-distance shot, 60 feet away from the goal, the goaltender will have 0.45 seconds to react.

Early hockey sticks were stiff and heavy (between 26 and 30 ounces) and made from a single piece of wood. Many modern sticks have shafts made from aluminum, graphite, fiberglass, titanium or Kevlar, to which wooden blades are glued (they weigh about 18 ounces). The sticks have varying degrees of flex, which adds to the power generated.

Easton´s carbon-fiber Synergy, a return to the single-piece stick, is used by about 40 percent of NHL players.

All of today´s sticks have curved blades to give a shot or pass more lift and power. The curved blade is widely credited to Stan Mikita of the Chicago Blackhawks, who discovered it in the early 1960s. Mikita accidentally jammed the blade in practice, causing an exaggerated curve. He continued to use it and was amazed by the unusual movement in his shot.

In 1945, Californian Frank Zamboni designed a machine to quickly resurface ice. Today, the Zamboni machine is a fixture at rinks around the world. It scrapes off ice chips created by skaters´ blades, then lays down a coat of hot water that creates a new surface in about 10 minutes.

A hockey puck is 1 inch thick, 3 inches in diameter and weighs about 6 ounces. It is made of vulcanized rubber and kept frozen before the game.

The first player to wear protective headgear was George Owen of the Boston Bruins in 1928. Owen had also played football and wore his leather football helmet on the ice. Early hockey helmets that followed were skimpy leather affairs.

The January 1968 death of the Minnesota North Stars´ Bill Masterson provided the impetus for widespread use of helmets. In 1970, plastic foam helmets became mandatory for players in college and junior leagues. In June 1979 a rule was passed requiring all new NHL players to wear helmets. Veterans accustomed to playing without a helmet could choose to continue to do so.

Although Jacques Plante of the Montreal Canadians was not the first to wear
a goaltender´s mask, he fashioned his own fiberglass mask, used it regularly after being struck in the face by a shot in 1959 and gave the equipment the impetus it needed. At the time, other goalies reacted violently to Plante´s
innovation, arguing that it implied a lack of courage.

Andy Brown of the Detroit Red Wings, who retired in 1973, was the last of the maskless goalies.

Every time goalie Gerry Cheevers of the Boston Bruins was hit in his mask by a puck, he etched into the mask the stitches he would have needed without the protection. Decorative touches are common on goalie
masks today.