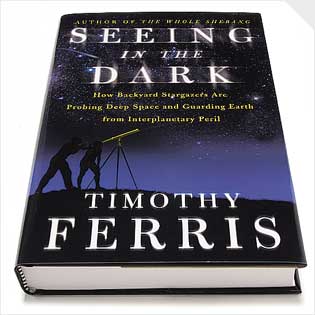 The discovery of asteroid 2002 NT7, the space rock that astronomers believe could collide with Earth on February 1, 2019, wasn’t the worst cosmic news of the summer. More unsettling was the announcement on June 17 that a football-field-size asteroid had whizzed by Earth three days before. It missed us by 750,000 miles–less than a third of the distance to the moon–and had the destructive pop of a nuclear weapon.

Then this rev-elation: Of the 50 such asteroids that cross Earth’s path each year, only a few fall under the watchful gaze of institutional observatories. That, explains author Timothy Ferris in his new book Seeing in the Dark (Simon & Schuster), is where you come in. Thanks to high-resolution CCD cameras and Dobsonian telescopes, backyard stargazers are probing deeper into space than ever before, and guarding Earth from interplanetary peril while they’re at it. Consider: A hunk of rock just 1 kilometer wide could do catastrophic damage.

Amateurs, Ferris explains, have always been important. Steve O’Meara, for example, used the old-fashioned method of sketching at his telescope to produce drawings of spoke-like patterns in Saturn’s rings in the mid-1970s. Scientists discounted them until Voyager confirmed their existence in 1979. More recently, amateurs have been linking up on the Internet to discover everything from exploding stars to new asteroids.

Ferris also sums up the latest news, explaining the mysteries behind the Ring Nebula, Silver Coin galaxy, and Virgo supercluster. Best of all, he writes in a language accessible to laymen and scientists alike.

There’s a space rock out there with your name on it. Here’s how to find it.

Step 1: Buy the Right Equipment
Find yourself a good CCD telescope–reflection or refraction will do–and a star chart (free at www.fourmilab.to/yoursky).

Step 2: Go Star-Watching
The Near Earth Object page offers good advice on where to search.

Step 3: Report Your Find
You can do that here. Astronomers will respond within 24 hours.