Oceanography: They came from the bottom of the sea. 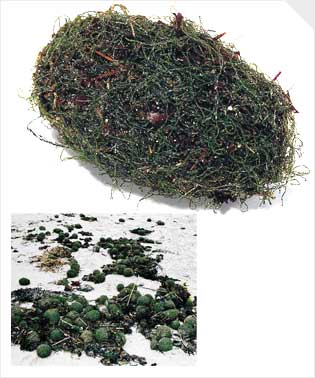 BRILLO BEASTS
Beachgoers and scientists alike were baffled when thousands of these globs washed up on a New Hampshire beach.

It was June, a summer day like any other, when thousands of green invaders arrived at the Plaice Cove beach in Hampton, New Hampshire. The eerie green globs, which looked and felt like Brillo pads, were everywhere. Marine biologist Ellen Goethel was summoned to explain what they were, but she had never seen anything like them. She wasn’t even sure if they were natural or man-made.

Goethel examined a few of them under a microscope. They consisted mostly of plant life, but krill, tiny plankton-like animals, were mixed in as well. She showed them to lobstermen, who said their traps were sometimes fouled with the things after storms. But the fishermen couldn’t identify them either.

Now the mystery has been solved by plant biologist Arthur Mathieson and marine scientist Frederick Short of the University of New Hampshire. The globs consist mostly of a seaweed called Chaetomorpha picquotiana. This seaweed proliferates when there is a rise in the amount of nitrogen and phosphorus in the water–often brought by sewage or lawn fertilizers. The seaweed forms rope-like masses that break into fragments. Wave action rolls these fragments around the ocean floor, mixing them with krill, shells, and sand, and ultimately creates the globs.

Their appearance on the beach required an unusual series of circumstances–heavy coastal rains, which probably carried the sewage and fertilizer into the ocean, then perfectly timed storms that formed the globs and guided them to Plaice Cove, where the geology is uniquely welcoming. It’s not likely to happen again soon, says Goethel. But if it does, there’s nothing to fear: The globs are completely harmless.