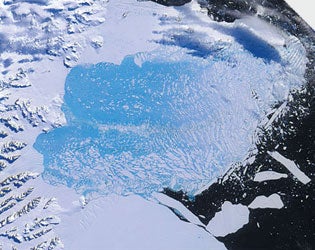 Satellite image shows the Larsen B ice shelf breaking away from the Antarctic Peninsula in March 2002. Warming is cited as the cause.

In 1997, the Antarctic Mapping Mission, a collaboration between the Canadian Space Agency and NASA, delivered the first complete high-resolution detailed images of Antarctica, using the Radarsat-1 satellite.

With an average elevation of 8,000 feet, Antarctica is Earth’s highest continent.

A number of countries have established year-round research stations on Antarctica. The Antarctic Treaty, signed in 1959, neither denies nor gives recognition to existing territorial claims made by seven of those countries (the United States is not one of the claimants). In effect, no country owns Antarctica.

In 1998, NASA satellite data showed that the Antarctic ozone hole was the largest on record. The hole swells and contracts; it grew even larger in September 2000.

British airborne radar in the 1970s yielded the first evidence that a huge bed of water might lie buried beneath 2 miles of ice near the Vostok station. Twenty years later, satellite data revealed one of the largest lakes in the world–about the size of Lake Ontario. Biologists believe that the lake has been cut off from the rest of the planet for some 15 million years, so it may contain unique life-forms.

The exact location of the geographical South Pole shifts about 30 feet per year.