What Drives a Mouse to Drink? Its Genes.

Neurology: Why does stress turn some people into lifelong boozers, while others can gut it out with no lasting harm? 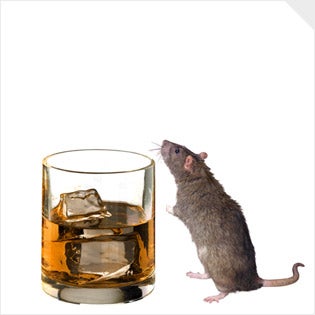 Why does stress turn some people into lifelong boozers, while others can gut it out with no lasting harm? Researchers at Munich’s Max Planck Institute of Psychiatry studied this question by testing mutant mice that couldn’t handle stress well. The answer, they now say, may lie in our genes.

The mutant mice lacked a gene that makes receptors for corticotropin releasing hormone (CRH), which plays a major role in stress response. Both mutant and normal mice were put into situations frightening enough to rattle any rodent’s nerves. Male mice were placed in a cage next to a bullying, aggressive male for three consecutive days (a wire mesh separated the two) or spent 5 minutes trapped in a container in which they were forced to sink or swim.

The stressed-out mice were then put back in their cages and given a choice between water and alcohol. At first, both mutant and normal mice tippled occasionally. But after a month, mutant mice were drinking more than twice as much alcohol as normal mice. And six months later, the mutants were still drinking heavily, while the normal mice took just the occasional swig.

Scientists aren’t sure how a lack of these key receptors predisposes the mutant mice to alcoholism. But the study suggests that similar mutations in humans might help drive some humans over the edge after emotionally stressful events. Consequently, researchers plan to look for mutations in the CRH receptor genes of alcoholics.