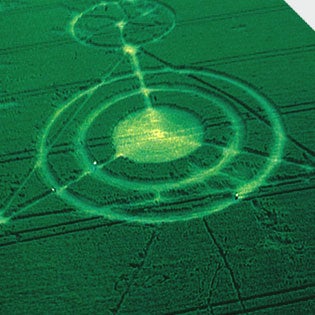 When two men claimed responsibility for England’s crop circles in 1991, the world let out a collective “case closed.” But not Colin Andrews, founder of Circles Phenomenon Research International, who claims hundreds of them are unexplainable. Andrews, who is not a scientist, served as advisor to Signs, in theaters August 2; we caught up with him to get his take on all things (paranormally) circular.

Popular Science Hasn’t it been proven that crop circles are hoaxes?

Colin Andrews Not necessarily. When Doug Bowers and David Chorley demonstrated their method of creating them with a plank, rope, and baseball cap, it dramatically affected the public’s perception. But I’ve found that just over 80 percent appear to be manmade, with indications like soil depressions and trace marks. Twenty percent do not. There’s something real here.

CA They scream of intelligence. My gut feeling is that something is trying to get us to look at ourselves and how we respect or disrespect our surroundings. I get a sense that there is concern for our environment and our planet.

PS Ever seen one form?

CA No, but I’ve interviewed about 30 people who have. Their stories vary, but they agree on several features: The plants initially oscillate, then collapse with force and rotate within a vortex until they are lying completely flat on the ground. The process takes less than 10 seconds.

PS Have any formed recently?

PS Ever created one yourself?

CA Oh yes. We’ve tried all sorts of things to replicate the features of the unexplained 20 percent. But we simply can’t.