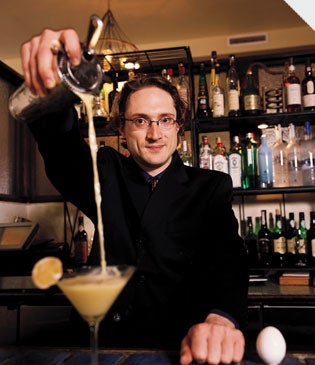 “Never trust a bartender who uses a glass instead of a metal shaker.”

He used to study the gene-sequencing of fruit flies at MIT’s Whitehead Institute, but now 31-year-old Eben Klemm brings his methodological training to what might be called human ethyldynamics: He formulates $12 cocktails at a Manhattan restaurant called Pico.

Now, it’s not unusual for cocktail makers-amateur and pro-to fuss about precision, tools, and temperatures. But Klemm’s approach is more complicated; he understands the blend of chemist, chef, and showman required to justify top dollar for a few ounces of juice and booze-and to get a signature drink mentioned in The New York Times. His lab, a terrazzo-tile bar with Egyptian glass, contains beakers filled with candied ginger and grapefruit, homemade maraschino cherries, and pickled leeks. He’s a botanical enthusiast who spends down time searching health food stores for marigold flowers, then brews them into an infusion called calendula. He contemplates the effect of alkaline (ginger, papaya) and acid (grapefruit juice) solutions when suspended in premium alcohol and hypercooled with the correct number of vigorous shakes.

“Although inventing a new cocktail and the trial and error of testing do not follow the rigor of the scientific method,” Klemm notes, “one doesn’t mix drinks without an expected result or prediction of flavor, given a familiarity with the chemicals used.”

Whatever the process of discovery, results include improbable combinations like the Ann Hester, a blend of calendula, gin, and Campari-grapefruit foam (emulsions have been a hot trend in experimental kitchens for some time). Klemm says his most famous drink addresses the four primary tastes recognized by the tongue-sweet, sour, salty, and bitter. But he’s aiming for the nose as much as the tongue: “There are more genes for remembering smell,” he says.

Klemm demonstrates the crucial importance of achieving proper suspension even in the most rudimentary blended drink. He prepares two vodka gimlets (vodka and Rose’s lime juice) and places them side by side. I note that one is definitely smoother in the mouth than the other. The difference: The better drink has been shaken 30 times, the other only 10.

“Never trust a bartender who uses a glass instead of a metal shaker,” Klemm adds. “Glass has a much higher specific heat than steel, limiting its cooling capability.”

For the would-be home cocktail chemist, Klemm recommends developing a specialty and sticking to it: “Inconsistency is a demon, so focus on a single drink when entertaining.”

Put the egg, ginger juice (extract with a juicer or dissolve powdered ginger in warm water), rum, and Grand Marnier into a shaker filled with ice. Add a dash of simple syrup. Shake 30 times until well-blended. Pour into martini glass. Drizzle grenadine syrup on top. Serve.