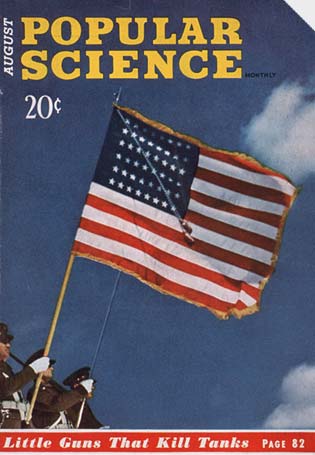 After Pearl Harbor, Dec. 7, 1941, the first few months of World War II were
grim. The U.S. Pacific fleet was crippled, and the United States lost dozens
more warships in a series of naval setbacks. The Japanese took Guam and
overan the Phillippines, though Gen. Douglas MacArthur promised to return. It
would be three long years before MacArthur would in fact return in October of
1944, wading ashore at Leyte as a prelude to liberating the Phillipines.

In mid-1942, some 500 magazines, including Popular Science, joined together
to show patriotism and national unity by displaying the American flag on
their covers. The Smithsonian Institution´s National Museum of American
History-home to the original star spangled banner celebrated in Francis Scott
Key´s anthem-is celebrating the 60th anniversary of the 1942 campaign with
“United We Stand,” an exhibit that will run through October 28.
The program unites a collection of the covers for the first time since they
were seen at newsstands across the country in 1942. To view 300 of the covers
and learn more about the exhibition, see [www.american history.si.edu](http://www.american/ history.si.edu).