A prize-winning teen proves the mettle of an ancient herb. 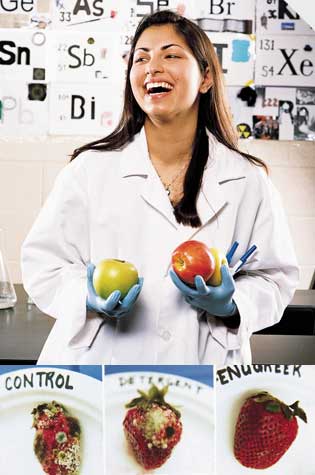 Photographs by (top) John B. Carnett and (bottom) Kavita Shukla

Kavita Shukla of Ellicot City, Maryland, may be just 16, but she’s been inventing stuff for years. In fourth grade, she came up with an egg slicer (decorated with a plastic chicken) that was activated by a marble. At 13, after her mother lost three gas caps from her car, Shukla rigged up a temperature-sensitive system that signaled when the cap was off.

But her best invention so far-for which she recently received a Lemelson-MIT High School Invention Apprenticeship-was inspired while visiting her grandmother in Bhopal, India, where tap water teems with bacteria. One day, after Shukla swallowed some water while brushing her teeth, her grandmother gave her fenugreek-an herb long used in Indian cooking and medicine. Shukla didn’t get sick and she began to wonder whether the herb could really protect against bacteria. Soon, the Shukla family’s refrigerator was full of berries, some rotting, others remaining remarkably fresh.

Now, after two years of experiments, Shukla has shown that paper treated with fenugreek does indeed preserve fruits and vegetables for weeks.

No one knows the why or how of fenugreek’s preservative properties, but the apprenticeship should help her find out. It will allow her to continue her research in a well-stocked lab under the guidance of a professional scientist.