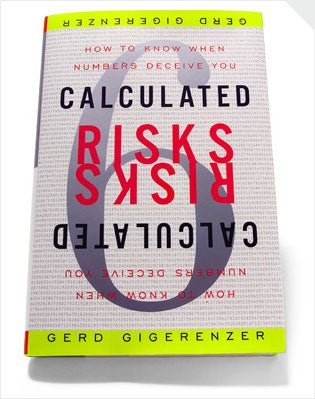 There are lies, damned lies, and probabilities. That’s the nub of Gerd Gigerenzer’s Calculated Risks: How to Know When Numbers Deceive You (Simon & Schuster, $25), which argues that misrepresentation of health and crime statistics often inflates the sense of risk and the expectation of benefits.

When risks are expressed as simple probabilities (“men have a 1 in 6 chance of getting prostate cancer”), the meaning is often obscured. In one example, Gigerenzer, a German cognitive scientist who has taught extensively at American universities, cites a study in which a group of educated women, all in their 40s, predicted that 60 lives would be saved if 1,000 women like themselves were screened for breast cancer. The correct result, says Gigerenzer, would be closer to 1 (screening has a modest effect on mortality reduction in women younger than 50, a fact obscured by the “one in 9” breast cancer lifetime risk often cited). The cost of poor risk communication can be high: wasted public money, inflated expectations from overhyped treatments, and fear.

Gigerenzer is not against screening; he’s for balanced communication of risk through the use of “natural frequencies”-which describes the number of occurrences of an event in a given group at a given time. The work reads like a strong monograph that’s stretched into a book, but it’s a worthy look at the dangerous intersection of statistics and psychology.