When Mickey or Bullwinkle falls to pieces, it's Ron Stark to the rescue!

Ron Stark couldn’t believe it. A woman was approaching him holding a rare piece of original animation from Walt Disney’s Fantasia. “It was Mickey Mouse from ‘The Sorcerer’s Apprentice,’ and she was waving it around like a piece of salami. Flakes of paint were sprinkling off of it,” he recalls. “What do I do?” she asked. “Well, the first thing you do,” he replied, “is hold it flat.”

That was 26 years ago, back when Stark was volunteering at the International Animated Film Society’s annual festival in Los Angeles. (By day he was a radio, TV, and film producer for the American Heart Association.) Stark had already repaired many donated cels-the painstakingly hand- painted clear plastic sheets that were used to create thousands of classic animated films before the digital age. But never before had he worked on anything as challenging as Mickey. Once Stark finished, he got to thinking that there must be thousands of people out there hanging on to priceless but damaged cels without any way to repair them.

So Stark decided to create the Search and Rescue Team project and became perhaps the world’s first cartoon doctor. From former inkers and painters, he learned the basics of creating animation art. He studied how to use different kinds of microscopy to examine such cel characteristics as surface texture, flexibility, color, and clarity. He also learned what causes problems. “In most cels, much of the damage comes from trauma,” says Stark. Since cels are made out of petroleum derivatives like cellulose acetate or cellulose nitrate, they attract dirt and oil from a handler’s fingers. “Often, somebody sees dirt on the cel, gets a bottle of window cleaner, sprays it on, and turns the image into mayonnaise.” Indeed, there were no products to safely clean and polish the cels-until Stark developed his own chemical reagents.

Today, Stark’s company, S/R Laboratories Animation Art Conservation Center, in Westlake Village, California, is the world’s only animation art conservation center. Everyone from Pepe LePew to Fred Flintstone has passed through its doors. And each one has left feeling like a brand new toon.

At death’s door, Donald gets his feathers fluffed and his paint refreshed.

This cel-a clear plastic sheet, similar to 35mm film-was created in 1966. Stark determined it was starting to lose its acetic acid. This forces the cel to stretch “like a piece of taffy,” he says, and as it changes shape, the paint begins to flake off. To repair it, Stark first removed the acid. He next cleaned and polished the cel and chemically sealed it. Then began the painstaking process of matching the paint colors, first by eye and then by confirming them on a computer. For a long time, Disney refused to provide Stark with its proprietary paints, most of which are no longer made. Then one day, about 10 years ago, Stark got the pigment formulas from a former assistant colorer who had worked in one of Disney’s labs. He took the formulas to the National Society of Paint and Coatings Technology, where volunteers from the society’s retirees club converted them to modern-day paints that match original Disney colors.

If the old paints are rewettable, technicians can work with them. But if they have petrified, as in this case, there’s a problem. The old paints were made out of gum arabic. To soften the gum, the technicians add a compound that is essentially table sugar. When fresh, the gum “breathes,” absorbing and then releasing moisture from the air. But over time, the sugars crystalize and the paint becomes brittle and cracks. In such cases, the paint is chemically removed and the cel repainted based on Stark’s color keys. In addition to Disney, Hanna-Barbera and Warner Brothers have also given Stark their color palettes. “So there isn’t much we don’t have now,” he says.

Less than 2 percent of the 475,000 cels used to make Walt Disney’s Snow White exist today. Counterclockwise from top right: Stark cleans the dwarves; opens his trove of rare paints; touches up Snow White; and proudly poses with the result. 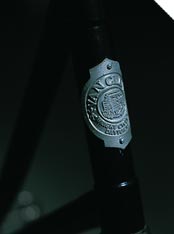 Reproduction of the badge the Wrights put on their bikes 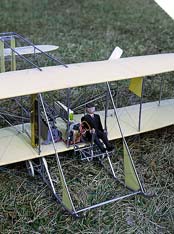