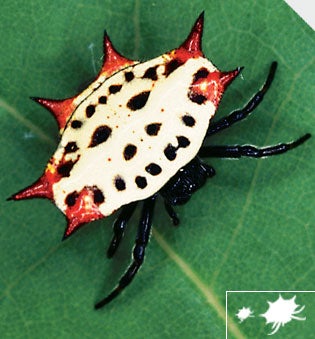 by University of Florida/Dept. of Entomology

SPIDERS THAT SWING
Male G. cancriformis spiders (whose actual size is show above right, with larger female) prefer to mate with virgins.

When a male spider of the species G. cancriformis goes a-courtin’, it’s in his evolutionary interest to choose a virgin. That’s because a female’s first mate almost always gets to fertilize her eggs, while subsequent males wind up with nothing to show for their ardor. Which made Todd Bukowski, an evolutionary biologist at the University of Arizona at Tucson, wonder: How good are these male spiders at spotting virgins?

Bukowski decided to answer that question by observing their mating behavior. He and his colleagues introduced males to virgin, non-virgin, and, yes, “half-virgin” females-spiders have two sets of reproductive organs, so a female can be virgin on one side and experienced on the other. Bukowski found that males would attempt to mate with any female at least once, regardless of her sexual history. But males who mated with virgin females were far more likely to come back for a second tryst with the same partner.

At first, Bukowski thought males avoided non-virgins out of fear, since females sometimes kill their mates. He even saw one female pluck a puny male from her epigynum (the female reproductive organ) and eat him. But experiments showed that virgins are just as likely to murder their mates as non-virgins. Apparently, these gentlemen spiders prefer virgins-but can only spot one by trying her out.