Secrets of a Major League Lawn

Water and fertilizer are just the beginning--especially when the field is brand new. 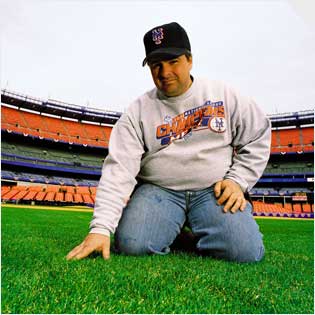 The season opener at Shea Stadium in Flushing, New York, is two and a half weeks away, and Mike Williams is most definitely sweating the details.

Over the winter, Shea’s 38-year-old field was ripped apart and brought into the 21st century. Now Williams is scrambling to ensure the new grass is green by the time Bobby Valentine’s Mets hit town. It seems like a tall order: Although the outfield feels springy, it’s flecked with unhealthy-looking white and brown blades.

But Williams, in his second year with the Mets, is confident. The bluegrass he’s selected, a hybrid mix of Midnight, Adelphi, Princeton 105, and Touchdown species, has the highest rating for traffic tolerance, disease and insect resistance, fertility rate, speed of establishment, and, yes, color. He points toward a patch near the warning track in right that already sports a deep green hue. “Isn’t that beautiful?” It is.

Surely the record warm winter has helped the sod take root, but Williams is the catalyst. He fertilizes by hand using two parts potassium for every part nitrogen, adding smaller amounts of phosphorous (early in the season), iron, copper, boron, magnesium, and manganese. He waters daily with the help of 81 new pop-up sprinklers, and takes regular soil samples to ensure he’s providing a proper diet. He replaces patches that don’t meet his standards. And next week, he’ll break out the Jacobsen Tri-King 1800 G mowers. Williams is a reel man–rotaries, he says, rip the grass, but reel mowers slice the blades evenly. Equally important, they create the checkerboard pattern so aesthetically pleasing to fans.

“Grass is a living, breathing organism,” he says, his Ohio accent revealing a hint of Southern drawl. “You’ve got to feed it, give it a drink, give it a haircut. Ninety percent of the job is common sense, water management 101.” Some of it is technology too. Shea’s old drainage system was notoriously slow, making the outfield play like a mudslide after rain delays. Now, thanks to a 12-inch sand-and-peat root zone, a quarter-inch of gravel, and a drainage network beneath it, the field will dry out within minutes of a torrential downpour.

The infield gets as much loving care. Composed of 60 percent sand, 30 percent clay, and 10 percent silt, it must provide both firm footing and a soft feel for grounders. A kiln-dried calcine conditioner called Mule Mix 816, applied daily, ensures the diamond retains a proper moisture level, and the artisans of Williams’ nine-member crew are constantly raking, rolling, and screen-dragging it to a brown sheen. Then there’s this ex-catcher’s favorite area: home plate. Though he uses pure clay to prevent hitters from slipping, Williams admits he softens up the area in front of the batter’s box for, say, a sinkerball pitcher to prevent high choppers that can turn into hits. “You want to reward a guy for good pitches,” he says.

But for Williams, a groundskeeper’s rewards are far subtler: safety and consistency. “I want players to be confident running the bases,” he says. “And I want all our infielders to win Gold Gloves. I take bad hops personally.”