Two teens launch a business, and it flaps. 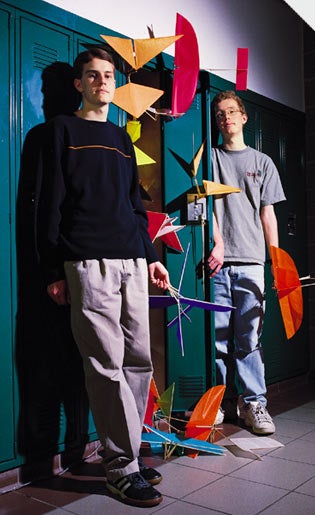 High school students Sean Frawley, 18, and Dan Getz, 17, are serious about what they sell.

The Ornitech company of Warwick, New York, got off to a rocky start. In 1999, founders Sean Frawley and Dan Getz went to the bank to open up a business account. At first, they were greeted with giggles. So they explained their business plan to a bank officer who offered this objection: “You´re only 15.”
“Well, we decided to just go forward,” says Frawley. From its headquarters in the Frawley family basement, Ornitech has since shipped hundreds of ornithopter kits. An ornithopter is a contraption that flies by flapping its wings. Ornitech´s versions are brightly colored toys you assemble yourself and power with rubber bands. The company won´t crack the Fortune 500, but it is a terrific example of what two precocious teenagers can do with a good idea, hard work, and a presence on the Internet, where nobody knows you´re a kid.

“I´ve always been fascinated by anything that flies,” says Frawley. Around 1997, he found a Web site chronicling a Japanese effort to launch a human-powered ornithopter. Frawley was fascinated, but when he and Getz went looking for more ornithopters, they were surprised how few were available. They decided to fill the void themselves.

Frawley designed two prototypes, based on plans he found on the Web and elsewhere: the four-winged Dragonfly and the v-tailed Swallow. Getz, who has a flair for computers, used the AutoCAD software in his dad´s civil engineering office to draw up professional-quality blueprints. They tested their prototypes hundreds of times, and then Getz designed the companyâ€s Web page (members.tripod.com/ornitech) and set up an accounting program to keep track of orders. Business has been trickling in steadily ever since. The Dragonfly kit is $20; the Swallow sells for $11.50.

Inevitably, Frawley and Getz have taken on more challenging ideas. Right now, they are working on a school project to build a solar-powered balloon capable of carrying a person. As they prepare to head off to different colleges, Ornitech´s future looks a bit shaky. “We´ll find a way to continue,” says Frawley, confident as ever. “Maybe we´ll bring in Dan´s younger brother. He´ll be a high school freshman next year.” That should be plenty old enough to run Ornitech.