Everything you ever wanted to know about the memorabilia on display in the traveling Baseball Hall of Fame. 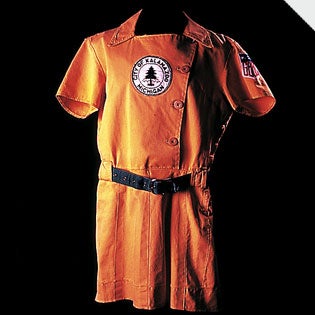 by Photograph courtesy of the American Museum of Natural History

Part of baseball’s lore lies in its artifacts, a rich lode of which constitutes “Baseball as America,” the first-ever traveling exhibit from the Cooperstown, N.Y., Baseball Hall of Fame. The retrospective also testifies to the impact of technology on the game.

The exhibit will be at the American Museum of Natural History in New York until mid-August. It will travel to Los Angeles and eight other cities as part of a four-year tour. The facts that follow all relate to memorabilia on display.

Edd Roush needed brute strength to swing a thick-necked, 47-oz. bat in the 1910s and ’20s. The “dead” balls Roush swung at didn’t travel far, so hitters valued balanced bats they could control for placement of the ball. The arrival of balls with cork and rubber cores changed all that.

A flat-sided bat for laying down bunts was legally used from 1885 until 1892.

One exhibit lets you handle replicas of famous bats, including newer, whippier models. Rod Carew’s 32-oz. model, with which he got his 3,000th hit in 1885, is so thin at the neck you can imagine snapping it in two.

Players first wore gloves to protect their hands, but changes in shape and size have made the equipment indispensable to fielding.

The first padded catcher’s mitt was invented and worn by minor leaguer Joe Gunson in the 1880s. Gunson, already injured but forced to catch both games of a double-
header, stuffed felt scraps, sheepskin, and buckskin into
a fielder’s glove.

The first catcher’s mask was invented by Harvard’s Fred Thayer in 1877. “The new mask adds greatly to the confidence of the catcher,” reported the Harvard Crimson.

In 1930, the Kansas City Monarchs, frequent Negro League champions, began transporting a portable lighting
system that included a 250-horsepower motor, a generator, and collapsible poles that could rise up to 50 feet. The first Major League night games were played in 1935.