Got a thing for that swing? Randy Forrester wants you to put on his dancing shoes. 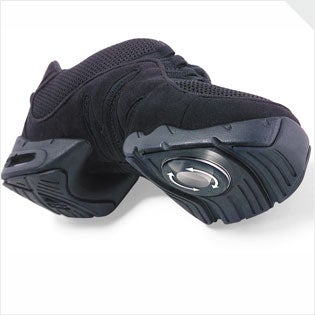 Randy Forrester was mesmerized. He was in Hartford, Connecticut. It was 1994, and he was seeing break-dancers for the first time. They spun, twirled, and contorted their bodies in all sorts of strange ways. But as the parent of a 17-year-old daughter, Angela, he could also anticipate the painful injuries to come. Angela had often hurt her knees dancing, and these kids’ moves were much more extreme. He got to thinking: “There’s got to be an easier and safer way.” When he returned to his home in Dayton, Maine, he started futzing around with old shoes. Two years later, he patented the RMM Spinner, a shoe fitted with a rotating disc in the ball that helps dancers turn easily without twisting their knees or ankles. “Aerobics instructors have tried them out and love them,” he says. (One of our own editors was so inspired, he got up on his desk and spun like a top.) Forrester, a quality engineer at Pratt & Whitney, has so far spent $14,000 of his own money on the prototype shoes and is now looking for a manufacturer.