Engineering: Building a die that builds all. 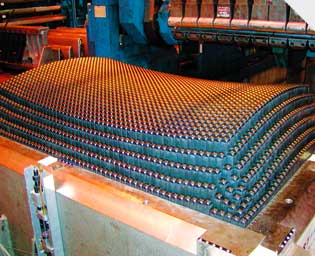 EASY AS 1-2-3
To recast the universal die, thousands of heavy metal pins must be raised or lowered. This requires so much elecricity that the die must be configured in three stages. Still, this process requires only 15 minutes–much less time than a standard die.

The die is cast,” declared Julius Caesar as he led his legions across the Rubicon River toward Rome. Ever since, a die–a tool used to mold raw material in manufacturing–has come to symbolize irrevocable action. Once you’ve built or “cast” one, there’s no turning back, because the tool can be used for one purpose only. But engineers have long struggled to create a “universal die” that can change to create a multitude of shapes. The latest effort is the result of a seven-year collaboration, underwritten by the Department of Defense, between aerospace giant Northrop Grumman, MIT, and North Carolina’s Cyril Bath Co.

The 42- by 72-inch die consists of a bed of 2,688 movable pins, each 11/8 inches square by 21 inches long. Computers move the pins up and down into the desired shape. To avoid excessive traffic on the communications network, the pins are controlled in modules of eight, each with its own microprocessor. A polyurethane blanket is then placed over the tips of the pins to prevent them from leaving dimples on the molded material.

Designers like John Papazian of Northrop Grumman are bullish on the die’s potential. “Imagine an airplane comes in with a bent or corroded part,” he says. “Ordinarily, you need to make a die for every replacement. Now they can just configure the die in whatever shape they want and move on to the next one.” In August, the Warner-Robbins Air Logistics Center in Georgia is scheduled to receive the first production model.