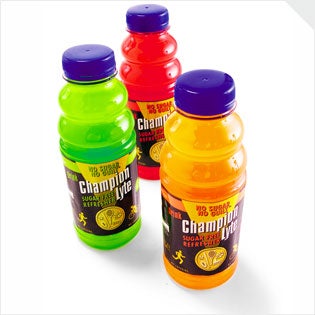 Think of ChampionLyte as the SnackWells of sports drinks: a calorie-free alternative that promises to keep you hydrated and replace electrolytes with “no sugar” and “no guilt.” It’s now available in major cities as it rolls out nationally (see www.championlyte.com).

Mark Streisfeld, company president, believes calorie-counting athletes will flock to his new beverage, made with a nonnutritive sweetener called acesulfame potassium and endorsed by Dolphin QB Jay Fiedler. “Sugar isn’t necessary except for sustained activity of 3 hours or more,” he says.

But Raquel Crocker, director of high-performance nutrition at LGE Performance Systems, which trains pro tennis, basketball, and football players, hopes her clients aren’t enticed. “If you’re exercising for 30 minutes or more, you need simple carbohydrates-even more than electrolytes,” she says. “Otherwise, you can stick with water.”

ChampionLyte may prove to be a notable advance for America’s 16 million diabetics, but it did nothing for us during informal testing. Our testers thought all four flavors had an artificial taste. Gatorade’s 6 percent glucose-fructose-sucrose solution, meanwhile, was easier to swallow-and only 50 calories per 8-ounce serving.