Boots for a Walk in Hell

There's equipment to reduce landmine risk, but the technology is imperfect. 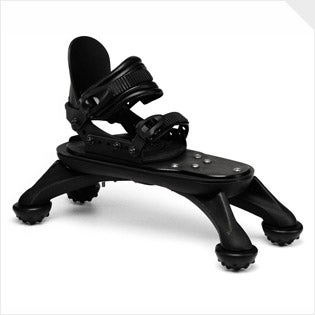 TREAD LIGHTLY: Anti-mine footwear includes “mine mattresses” worn by U.S. troops, and the MedEng Spider Boot (above). The local population, wearing mostly sandals, is largely out of luck.

In afghanistan, where landmines kill or injure some six people each day, soldiers in very strange-looking boots are often seen prowling about minefields. At first blush it seems naive to even ask the question-can the right footwear offer significant protection?

A variety of anti-landmine boots are now available, designed according to one (or more) of three basic strategies. The first aims to avoid triggering the mine. That’s the idea behind “mine mattresses”: oversized pads for the feet that spread the wearer’s weight to avoid triggering the mine. The second method provides a shield between the wearer and the mine. The Wellco Blast Boot, standard issue for American military personnel working near suspected mine fields, uses this approach. Its elaborate sole contains a metallic honeycomb sandwiched between a polyurethane outsole and multilayer Kevlar insole. The third strategy is known as “standoff”-putting some distance between you and the blast. The incredible force of a landmine explosion diminishes so rapidly that even 4 inches can make a difference.

So far, however, landmine boots have produced mixed results at best. Mine mattresses are difficult to walk in, especially over rough ground-and there’s no surer way of setting off a mine than tripping over your shoes and falling on it. Meanwhile, an Army team that studied the Wellco boot found it offered little more protection than the standard combat boot.

The best option right now may be the MedEng Spider Boot, which lifts the foot some 6 inches off the ground. Problem is, mine removers can’t afford to totter around like glam rockers in high heels. The Spider Boots also sink down into sand, reducing their protective distance.

The verdict: In certain circumstances, landmine boots provide their wearers with some degree of protection. But a completely effective boot is not likely to emerge until, as one mine-removal expert puts it, “the laws of physics are revised.”