Books: The Science of the Kitchen

Dash of trivia, pinch of wit: a new compendium. 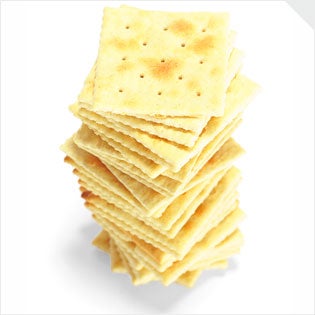 Why are there holes in crackers?

“The wonderful thing about science,” writes Robert Wolke in What Einstein Told His Cook (Norton, $29.95), “is that it can even explain things that nobody needs to know.” Wolke’s 320-page book proves his point on more than one page, but it’s excellent snacking material nonetheless. A few examples below.

**Where does all the blood come from

oxygen in the muscles, not the blood.

Why does blowing on food cool it?

Yep. The green spots contain solanine (a toxic relative of nicotine), cocaine, and morphine. Not that you’re likely to O.D. You’d have to eat your weight in green potato chips to experience any ill effects.

**Does belching contribute to global

In a tiny way. Americans drank 21.4 billion gallons of carbonated beverages in 1999, which they released into the environment as 800,000 tons of carbon dioxide, a greenhouse gas. Admittedly, this is a mere 0.04 percent of the carbon dioxide produced by U.S. automobiles.

Why are there holes in crackers?

Makers roll giant spiked rolling pins over sheets of cracker dough to pop air bubbles prior to baking. Failing to do so would cause unsightly burn marks.