Forest fires like this one destroy 4 million acres each year. We train with the elite force in charge of putting them out. 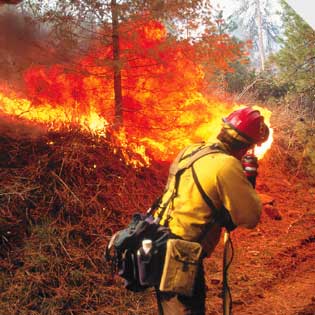 BAPTISM BY FIRE
Despite recent advances, controlling a forest fire still requires hotshots on the ground, sometimes battling it from just feet away.

Ten minutes. That’s all it takes for the fire to jump from the far ridge to within spitting distance. With no time to escape, and little chance of rescue, the order comes: “Deploy fire shelters!” I drop my pack and rip open my one-person heat shield as the fire closes in.

It never comes-this is only an exercise. I’m in Augusta Springs, Virginia, training with 20 “hotshots”-elite federal firefighters specially trained to control forest fires (the U.S. Forest Service employs 1,800 nationwide). When a fire strikes-as 100,000 do across the United States every year-it’s the hotshots’ job to hike in and put it out.

“We’re the ground infantry,” explains one, who goes on to jokingly emphasize the difference between hotshots and highly publicized smokejumpers. “They call us in when those media hogs mess up.”

Despite advances in flame retardants and satellite imagery that anticipates a fire’s movement, fighting forest fires is still a decidedly low-tech game. The primary tool: fire lines, strips of land cleared of flammable materials like trees and shrubs. There are no tricks here-just hard work. Perhaps that’s why, as soon as I arrive, they whisk me off on a 5-mile run, stopping every 5 minutes for push-ups. Later on we do pull-ups between lectures on fire strategy. But all that is prelude to today.

I show up early in full hotshot regalia-fire-resistant pants and shirt, rugged leather boots, a hard hat, leather gloves, and an equipment-laden backpack-and immediately we’re off to the backcountry. I carry a Pochna-a collapsible hoe for digging and clearing. Others carry chainsaws, leaf blowers, and a collection of custom-made tools including Pulaskis (combination ax and hoe) and McLouds (combination rake and hoe). We clear a 100-yard strip of forest in 2 hours. Then the imaginary fire comes. I’m exhausted.

But these guys are just warming up for the long fire season ahead. What keeps them motivated? “Part of it is a primal urge to fight fires,” says Paul Johnson, who heads the Augusta crew. “And then there’s the gratification of community service, but mostly I love the adventure-you just never know what tomorrow will bring.”

Want to learn more? Watch Nova’s Fire Wars, airing May 7 on PBS. The 2-hour documentary follows a hotshot team during the summer of 2000, one of the most destructive fire seasons in history.