Hope on the Horizon for Artificial Eyes

Restored vision might be in the future for the 3 million Americans who suffer from blinding retinal damage. 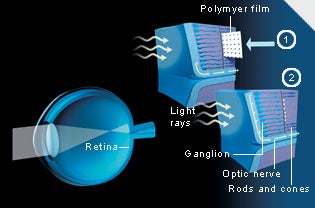 VISION OF THE FUTURE
Artificial ceramic cells that replace damaged rods and cones in the retina might restore vision in some blind people. (1) 100,000 ceramic cells on a 1mm-square polymer strip are implanted inot the retina. The polymer dissolves. (2) Light falls on the photocells, which creates a voltage differential. This triggers other cells in the retina to relay the electrical signals to the brain, where they are interpreted as vision.

Restored vision might be in the future for the 3 million Americans who suffer from blinding retinal damage. Alex Ignatiev and his colleagues at Houston’s Space Vacuum Epitaxy Center have developed ceramic photocells to replace damaged rods and cones-the millions of specialized cells in our eyes that convert light into electrical impulses. These signals are then interpreted by the brain, allowing us to see.

Other researchers have tried similar implants using silicon-based cells, but because silicon is toxic, it must be insulated from the retina. The ceramic cells, on the other hand, can be implanted without insulation and can communicate directly with surrounding nerves.

Animal tests have shown that the operation is safe, but how well the implants improve vision remains to be seen. If the procedure does work, Ignatiev expects people who once had sight to respond better than people blind from birth.

So far, he has gotten more than 200 inquiries about participating in the first human trials that are slated to take place early next year.