Evolution of the Metalheads 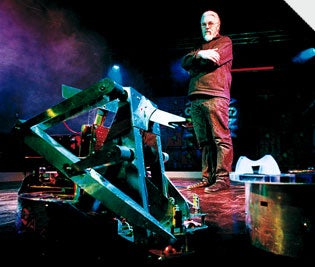 DARWIN IN STEEL Robot scientist Noel Sharkey looks on with satisfaction as a voracious predator bot (left) stalks its prey.

It’s a bot-eat-bot world at the Magna Science Adventure Centre in Rotherham, England. A herd of cylinder-shaped robots grazes peacefully, each angling its solar cells toward pools of light on which it feeds. Suddenly, a predator robot rams one of the grazers, trapping it between its metal tusks. The predator lifts the prey to its snout and sinks a single fang into the hapless robot. Vampire-like, the predator sucks away a quarter of the prey’s energy to juice its own battery. It then releases the prey to forage for more light.

This cybernetic food chain is part of an experiment in robot evolution by Noel Sharkey, head of the Creative Robotics Unit at Magna. In daily sessions, five predators and six prey struggle to scrounge enough energy to stay alive. The robots are programmed with random differences so they will develop uniquely. After several sessions, the most successful robots-those with the most stored energy-are “bred.”

Breeding the robots means combining the programs that control them. The programs are neural networks, patterned after the connections among the cells in a living nervous system. The networks take input from the robot’s sensors and give commands to its drive motors. Each robot has three neural networks to handle interactions with the three types of objects in its world: friendly robots, enemy robots, and walls and obstacles.
Programs using evolutionary algorithms are not new, but Sharkey’s experiment is the first evolution of an artificial food chain. Over generations, scientists and visitors alike will have a front-row seat at what Sharkey enthusiastically calls an “evolutionary arms race.”