Energy: Some say it's too big a job, but scientists would sure like to try. 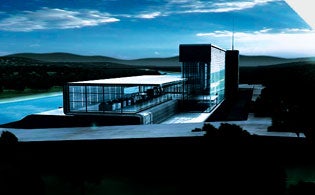 by Courtesy of D.O.E.

FANTASY PLANT Can the Zero Emissions Coal Alliance really produce an energy facility (above, an artist’s conception) that can satisfy the demands of both President Bush and environmentalists?

More than half of America’s electricity comes from coal- and coal is dirty stuff, contributing mightily to smog, acid rain, and climate change. Can it be cleaned up? The government says yes: President Bush has pledged $2 billion for his Clean Coal Power Initiative. But environmentalists scoff at the idea. “The term ‘clean coal’ is like ‘safe cigarettes,'” says David Hawkins of the National Resources Defense Council. “There’s no such thing.” Available technologies do little to reduce carbon dioxide emissions, critics say, and these emissions are a major contributor to climate change. What’s more, coal has to be mined (often by tearing up irreplaceable ecosystems) and transported, producing substantial emissions before it’s even burned.

So who’s right? Both sides are. The government is not wrong to seek ways of making coal cleaner and more efficient, but it won’t be easy. According to a senior official at the Department of Energy, the best hope may be the Zero Emission Coal Alliance (ZECA), a program started at New Mexico’s Los Alamos National Laboratory. ZECA’s goal is a coal power plant that produces no emissions at all. The plant would extract hydrogen from coal and water, and then use the gas to power a fuel cell.

The ZECA plant is simple and elegant, recycling nearly all waste products and heat. Coal, water, and lime (calcium oxide) combine in two chemical reactions to produce hydrogen, limestone (calcium carbonate), and waste ash. Hydrogen powers fuel cells, which produce electricity, water, and heat. The water goes back into the coal gasification process, while the heat drives a chemical reaction that separates the limestone into lime and pure CO2. The lime then goes back into the process, and only the CO2 is left. Finally, the CO2 combines with powdered soapstone to produce magnesium carbonate, an inert, stable mineral that can be safely disposed of.

ZECA claims its plant could produce electricity with an efficiency of 70 percent, compared to an average efficiency of about 34 percent at current coal power plants (though designers say the necessary fuel cell technology is still at least five years away). That would be twice the energy for the same amount of coal. With a quarter of the world’s coal reserves in North America, such a process could keep us in electricity for a very long time.

It’s not a perfect solution-a renewable energy source would be far superior. But for now, says Klaus Lackner, a professor of geophysics at Columbia University and a co-inventor of the ZECA technology, “The world is energy starved. We would be foolish to remove our biggest player.”