Microengineering: A new space-saving technique could make micro-gizmos much easier to build. 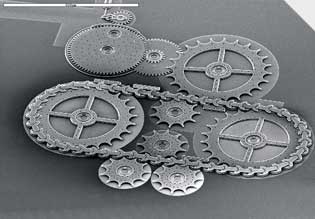 In 1869, French clockmaker Andr Guilmet conceived the idea of connecting gears
to the pedals of a bicycle and joining them to its rear wheel with a metal chain. The invention revolutionized the bicycle and, with it, transportation. Now researchers at Sandia National Laboratories have fabricated a tiny descendant of that early chain that saves space in microelectromechanical devices (MEMS) and which may prove far more revolutionary.

The chain, consisting of 50 silicon links, is thinner than a human hair. Because it can drive a number of components, it could eliminate the multiple micro drivers now needed to run a typical micromachine. “The drives we are working with are electrostatic,” says technician Ed Vernon-meaning they are powered by stored electric charges. “To generate enough force to be useful, they had to be pretty large, and one could take up as much as one-third of the real estate.”

Researchers produced the chain by alternating layers of “doped” silicon (silicon specially processed to conduct electricity) with layers of oxide. A photolithographic process, like that used to make printed circuits, was used to etch geometric patterns such as gears, hubs, and the chain links.

One of Vernon’s biggest challenges was to keep the chain from “floating” off the surface of the micromachine. Unlike the other components, it is not anchored in place. Vernon’s design incorporates clamping features that keep the chain secure, including overhanging guideways under which the chain passes without contact.

In the future, similar technology might be used to create everything from tiny coded locks to microcomponents for extremely complex weapons systems.