Kaboom! Kerpow! Antimatter to the Rescue

DC Comics' writers had a confusion of multiple universes so Byzantine that not even the editors could keep track of who was doing what to whom. 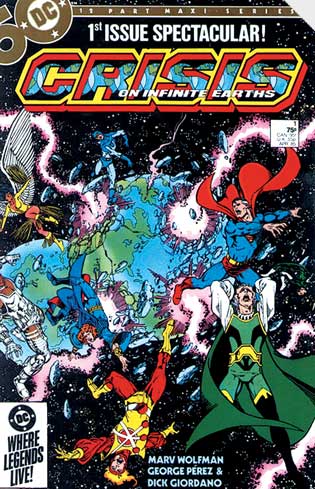 Having plot problems? Blow them up with antimatter.

DC Comics had a problem that only antimatter could solve. After decades of producing new adventures for Superman, Batman, and Wonder Woman, its writers had created a confusion of multiple universes so Byzantine that not even the editors could keep track of who was doing what to whom. On Earth 3, for instance, Lois Lane ended up married to Lex Luthor. So in 1985 the comics giant launched a year-long series, Crisis on Infinite Earths, that wiped out its multitude of unpopular worlds in a vast cloud of antimatter.

Pretty powerful stuff, that antimatter, especially as a plot device. Since antimatter was first produced in a lab in 1932, sci-fi scribblers have used it not only to destroy worlds but to make robots think and, somewhat presciently, to power spaceships.

“The handy thing about matter/antimatter is that it’s the ultimate expression of how you bring two things together and they go boom,” says Roger MacBride Allen, author of 18 science fiction books. “The poetic thing about it is that two unlike objects are attached to each other and destroyed.”

Science fiction icon Jack Williamson was among the first to use antimatter as a central plot element, in Seetee Shock (1949) and Seetee Ship (1951), both now out of print. Seetee stands for CT, or contra-terrene, meaning anti-Earth-in other words, antimatter. In 1950, meanwhile, Isaac Asimov postulated in I, Robot that a robot could be endowed with the equivalent of a brain thanks to an element of antimatter that would mimic human neurons.

Of course, the most popular purveyor of antimatter lore is Star Trek, whose protagonists have been zipping around on “warp” drive since 1966 thanks to Federation starships’ matter/antimatter engines. Spock was offed by a leak in the antimatter converter in the 1982 movie Star Trek II: The Wrath of Khan, but long before then antimatter had played to dramatic effect in the TV show. An antimatter bomb destroyed a giant ship-swallowing amoeba in one episode; in another, a stranger named Lazarus was forced to battle his antimatter counterpart to prevent the universe from blowing up.

Unlikely as those scenarios may be, Star Trek’s writers may have been on to something legitimate. NASA researchers have conceptualized a matter/antimatter propulsion system for a Mars vehicle. Meanwhile, physicists routinely produce antimatter in giant particle accelerators, and recently, at the European laboratory CERN, they succeeded in creating the first anti-atom. At this point, the main problem with such projects isn’t so much feasibility as cost. “It’s just unbelievable how expensive antimatter is to produce,” says Lawrence Krauss, author of The Physics of Star Trek. “To produce enough antimatter to power a light bulb would take 1,000 times the gross national product today.”

So now that antimatter’s in the bag, it’s time for investigators to get to work on another concept introduced on Star Trek: The Next Generation: anti-time.