The story behind the most successful failure of all time. 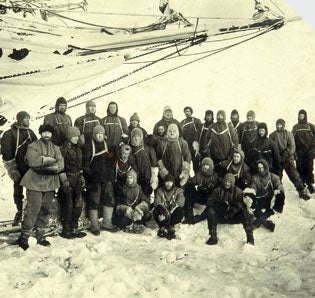 Shackleton and his crew pose for Frank Hurley’s camera while the Endurance was trapped in ice, July 1915.

With civilization 1,000 miles away, all Sir Ernest Shackleton could hear over his radio was static. He had left England several months earlier with a crew of 27 in hopes of becoming the first man to cross Antarctica on foot. But in January 1915 his ship Endurance became trapped in ice just short of the continent. It was later crushed to pieces, stranding him and his men.

Although stalked by starvation, insanity, and death, Shackleton brought them all out alive more than a year later. Now, Nova’s Shackleton’s Voyage of Endurance, a 2-hour documentary airing on March 26 on PBS, provides a stunning account of the ordeal.

To create the documentary, Nova chartered its own voyage to Antarctica. But by far the most impressive scenes were shot 87 years earlier by the Endurance’s own photographer, Frank Hurley. In one reel, crewmen play a game of soccer, their splintering ship momentarily forgotten. In another, a man holds tightly to a litter of puppies, each one marked for death by a shortage of food.

At times the documentary drags on-it takes 35 minutes to get through the final leg of the journey-but overall it encapsulates the crew’s triumphant struggle for survival. More important, it highlights the leadership genius of Shackleton, who at all times held strong to his family motto: “With endurance we conquer.”