ET Is Back. Is He Bringing Friends?

With the re-release of ET: The Extra Terrestrial on March 22, we thought we'd check in with Louis Friedman, head of the Planetary Society, to see how the search for the real ET is going. 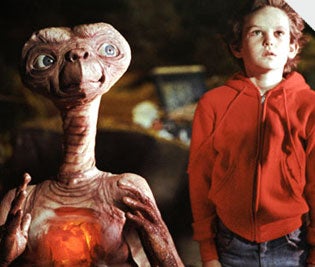 If ET is out there, chances are SETI (the Search for Extraterrestrial Intelligence) will hear him first-thanks in no small part to Steven Spielberg, the man behind 1982’s smash ET: The Extra Terrestrial, who donated $100,000 to Carl Sagan’s Planetary Society in 1985 to keep its receivers pointing heavenward. With Spielberg set to re-release the sci-fi classic on March 22, we thought we’d check in with Louis Friedman, head of the Planetary Society, to see how the search for the real ET is going.

Popular Science So have aliens dropped us a line yet?

Friedman In short, no. I think we can say the chances of a highly advanced civilization beaming high-power signals at us are slim. That said, we don’t know exactly what to look for, so we have to be receptive to whatever we find.

PS How are we searching?

LF Until the early 1990s, we were listening for signals with radio telescopes. Now the emphasis is moving toward light or infrared waves. We’re also building the world’s first observatory dedicated to SETI in Cambridge, Massachusetts. It will take first light by the end of the year.

PS Has the discovery of planets outside our solar system given you hope?

LF We don’t know whether any are habitable. But we do know life is found in the most extreme environments, such as the ocean floor. This gives us hope.

PS How has SETI@home (in which PC users utilize down time to crunch data from the Arecibo telescope in Puerto Rico) bolstered the cause?

LF With 3 million participants, it’s the largest science experiment in the world. We’ve only just begun trying to identify the promising signals.

PS Why are you working with dolphins?

PS Do you believe people’s stories about being abducted?

PS Have you ever seen an alien?